A goldfish was something most of us won at a fairground that lasted a few weeks and taught us about life and death.

However, Bluebell, a 17-year-old fish, is so adored that her owner recently paid £300 for oral surgery.

Bluebell is hand-fed by its owners and will come to the surface for a back rub, according to vet Hannah Jessup.

However, she became sick and needed to have something removed from her mouth. 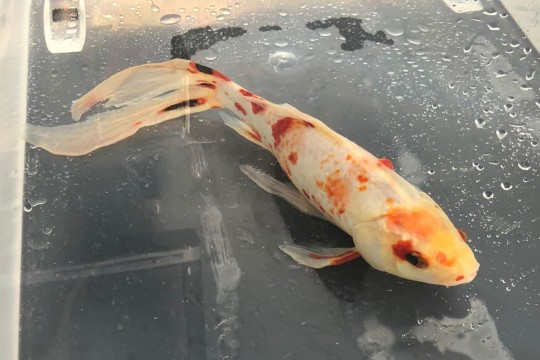 “Bluebell had developed a few lumps over the years that we were monitoring,” Hannah explained.

“The owners then noticed a mass growing in her mouth that started to affect her eating so we decided it was best to intervene as it was impacting the fish’s quality of life.”

“So we booked Bluebell in for surgery to remove the lump in her mouth.”

“This is the second time I have been involved in a surgery on a fish, but it was the first time that I was in command of the procedure.”

“From putting the fish to sleep to Bluebell waking up in recovery, it took one hour.”

“However the procedure to remove the mass took about 20 minutes.”

Bluebell was quickly returned to her home and back into her water following the procedure, and she is currently in better health than she has been in months.

Hannah explained. “The preparation for the operation was actually more complicated than the procedure itself due to having to use specific fish anaesthesia as they respond differently.”

“The anaesthetic is the most challenging aspect because there is less known about how a body of the fish works, in terms of how quickly it will fall asleep, how it will be maintained throughout the procedure, how it will react and the recovery.”

“She had to be submerged in an anaesthetic solution to make her drowsy which meant she was then able to be placed onto the operating table.”

“We also have her a painkiller afterwards to help with her recovery from the operation.”

She further added, “I had my team with me helping throughout the entire procedure to help keep her wet and to help me reach the mass inside her mouth.”

“The staff were using air pumps to keep oxygen flowing and syringes of water to keep her wetted.”

“We have done our follow-ups with Bluebell to check for any post-op complications but she is doing absolutely fine and eating better than she has in months.”

Ice cream lovers could be rewarded £1,000 to indulge in the sweet delight