Irrfan Khan: Here’s What You Don’t Know About His Life

Irfan khan was a proclaimed Indian actor who suffered from and fought the colon infection for years. He died on Wednesday (today) in Mumbai’s Kokilaben Dhirubhai Ambani Hospital surrounded by his loved ones.

He is known for his roles predominantly in Hindi cinema. But he never limited his talent and was part of some recognized British and American films such as Slum Dog Millionaire and Life of Pi. His most recent work can be seen in the movie named Angrezi Medium which was released on 13 March 2020.

Irfan Khan was one of the most admired spians of Indian cinema. He was diagnosed with a neuroendocrine tumor in March 2018. After which he flew off to London for his treatment. He only returned to India a year ago for a brief time to complete his shooting of Angrezi Medium and went back to London. Later he returned in September 2019 after surgery and treatment in London.

The early life of Khan

The Slum Dog Millionaire actor was born to a Muslim family in Rajasthan. His mother’s name was Begum Khan, and his father was late Jagirdar Khan ran a tire business, who belonged from a Khajuriya village near the Tonk district.

Irfan was a good cricket player, and at the age of 23, he was even selected for the CK Nayudu Tournament for emerging players. However, later he was unable to show up to the tournament due to the lack of funds.

His education was the stepping stone towards his shining career in the acting world. As he was studying for his MA degree, he earned a scholarship at the National School of Drama (NSD) in New Delhi in 1984.

He married his fellow NSD graduate Sutapa Sikdar on 23 February 199, and they had two sons named Babil and Ayan.

Life of a Star

After completion of his studies, he moved to Mumbai and started working as an actor in various television series. Some of the serials he worked in include Chanakya, Bharat EkKhoj, Laal Ghaas Par NeeleGhodand Sparsh.

He played several kinds of roles in which he acted like a psycho serial killer, famous revolutionary Urdu poet, Marxist political activist, and much more. Some of his best career’s work also went unnoticed.

He started his Bollywood career with his first lead role in 2005 with film Rog. He received many praises, and he later continued his work playing significant roles in various movies. Some of these are D-Day, QaribQarib Single, Jazbaa, and Gunday. Many of his performances in films like Madaari, Piku, Paan Singh Tomar, The Lunchbox and Talvarwere considered as outstanding and were well appraised.

Apart from that, Pakistani actress Saba Qamar has also worked with Irfan Khan in the movie ‘hindi medium’. 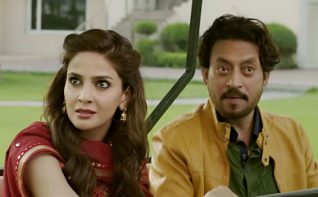 In 2008, Irfan khan contributed to an Arts Alliance production, id – Identity of the Soul where he was featured as a narrator. That performance brought a massive impact as his performance toured worldwide. The same year he played as a police officer in Slumdog Millionaire which stole the year by winning Screen Actors Guild Award for Outstanding Performance by a Cast in a Motion Picture.

Further, he worked with major production houses and acted in several roles in Hollywood. His time there included movies such as Life of Pi, Jurassic World, Inferno, The Amazing Spider-Man, and Puzzle.

Irfan Khan carries numerous feathers in his cap and has millions of fans around the world. In addition to his dedicated and empowered career, he will always be remembered for his humanitarian works and kind heart.

May his soul rest in peace!