One of the famous singers named Shehnaaz Gill has gained popularity after giving the splendid participation in the 13th edition of Bigg Boss. However, the young and talented girl had found a best friend, his co-contestant named as Sidharth Shukla, also featured in a music video.

Therefore, after the show ended, Shehnaz had continued their friendship with Sidharth for good reasons. Though, she has now landed herself towards the controversy as it all happened after her manager has ostensibly demanded money from one of the organizers in an award show, who wanted that Shehnaz must come live on Instagram for the awards. 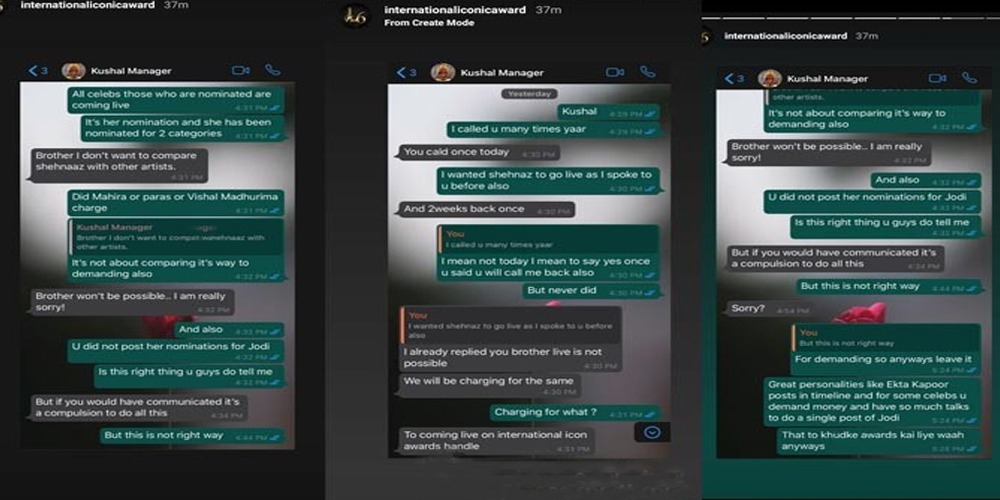 Thereby, the singer was also nominated from the two categories in The International Iconic Award, nonetheless, her manager has apparently denied for giving the demand for award show organizer.

However, the conversation on the WhatsApp between the Shehnaz manager as well as the show organizer has been leaked.

According to the screenshots that have been shared by the organizer of The International Iconic Award, they can easily see that Shehnaaz’s manager has repeatedly declined the acceptance of the offer.

Moreover, the conversation between these two personalities along with the award show saying that “All celebs those who are nominated are coming live.

Although Shehnaaz Gill was nominated for the two categories also responding related to the Bigg Boss 13 contestant’s manager said that, “Brother I don’t want to compare Shehnaaz with other artists.” On this message, the organizer wrote, “I wanted Shehnaaz to go live as I spoke to you before also.” To which, Shehnaaz’s manager added, “I already replied you brother, live is not possible. We will be charging for the same.”