Twitterati used photos of the late Sushant Singh Rajput to wish MS Dhoni on his 39th birthday as the Bollywood actor played the role of India’s Captain Cool. There is no doubt over the love that cricket fans around India and abroad share for Dhoni. However, his life became a famous story after the release of his biopic, 2016 film M.S. Dhoni: The Untold Story. 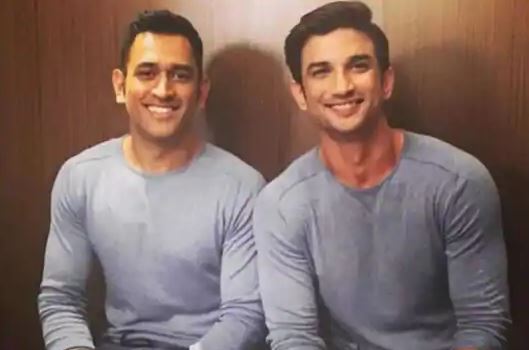 In Sushant Singh’s 7-year-long Bollywood career, one of the most revered roles that he played was that of Mahendra Singh Dhoni in his biopic MS Dhoni: The Untold Story, which will forever be remembered by both Sushant and Dhoni’s fans.

After Sushant’s tragic death, a video had surfaced on social media in which a fan paid a teary eyed tribute to the actor with a piece of artwork.

In the video, MS Dhoni is looking towards the sky in his Chennai Super Kings jersey. There’s a message as he looks up which reads, “Goddd…I’m taking GRS. I hope it’s a no-ball. He is….not out and he still needs to play. SSR you are a king man.”

On top of Dhoni’s picture is Sushant wearing the Indian jersey with No. 7 on it and besides the jersey, the number ’34*’ (34 – NOT OUT) is written, which signifies Sushant’s age.

A heart warming tribute to Sushant by our superfan!♥️😢

Sushant’s perfection at bringing out the similarities between real and reel-life Dhoni made fans fall in love with the actor.

In such a case, it became impossible for fans of both to not remember the late Bollywood star as they celebrated MS Dhoni’s birthday.

To wish their favourite cricketer while missing the late actor, netizens are sharing their pictures together.

Happy birthday to @msdhoni wishing you happy healthy and prosperous life ahead pic.twitter.com/gQb4sI3fwj

Twitter has been flooded with images of Sushant and Dhoni together. Fans have also urged Dhoni to work towards getting justice for Sushant’s death.

Happy Birthday #MSDhoni
Hope you Not Forget #SushantSinghRajput in Your Life..!!!
So Do Something for Him need #justice DO HELP AND DO CBI INQUIRY🙏@msdhoni @itsSSR @MumbaiPolice @kangna_ranaut__
This will be best Gift for SSR pic.twitter.com/8vsYF6MSwX