News is being circulated that a new strain of swine flu virus having pandemic potential has emerged in China. Actress Sonam Kapoor reacted to the news as she shared her experience when she contracted the flu.

Sonam shared a news link about the emergence of new flu. She posted a story in which she said that she would not wish this disease on my worst enemy.

“I’ve had a version of the swine flu…I wouldn’t wish it on my worst enemy. It’s one of the most difficult things I’ve gone through. I hope this isn’t true,” 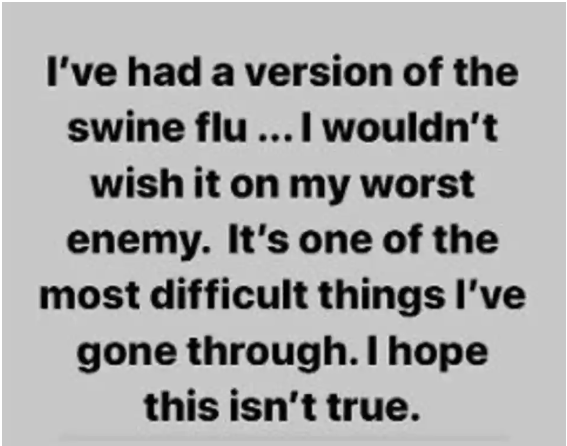 Sonam had contracted a kind of swine flu in 2015. She was about to join the shoot of her film Prem Ratan Dhan Paayo in Gujarat. She expressed symptoms of mild fever, cough, and cold. She was then airlifted to Mumbai. The hospital’s medical director had told the local news source, “Sonam Kapoor, who was being treated at the Sterling hospital for swine flu infection has been taken to Mumbai today by an air-ambulance,”

She had reportedly caught the virus from her trainer.

Alia Bhatt expresses love for her mother on birthday

Nora Fatehi opens up about struggles of a dancer

Popular dancing star Nora Fatehi has expressed her thoughts about dance and...

Carrot, Beetroot Juice: You Should Drink This Magical Juice Everyday

Almost everyone knows that Carrots and Beetroots are good for the eyes...

Since they got married, Sarah Khan and Falak Shabir have been giving...