Picture: Here is how Sanjay Dutt looks after cancer treatment

After being diagnosed with lung cancer, Bollywood megastar Sanjay Dutt was seen in a new picture. His fans got worried to see him in a weaker condition.

The Dhamaal actor can be seen wearing a powder blue t-shirt with dark blue pants in the picture. While posing with one of his fans, the Bollywood actor looks weaker than before.

Soon after the picture went viral on social media, his fans expressed their concerns over Dutt’s health and prayed for his speedy recovery. 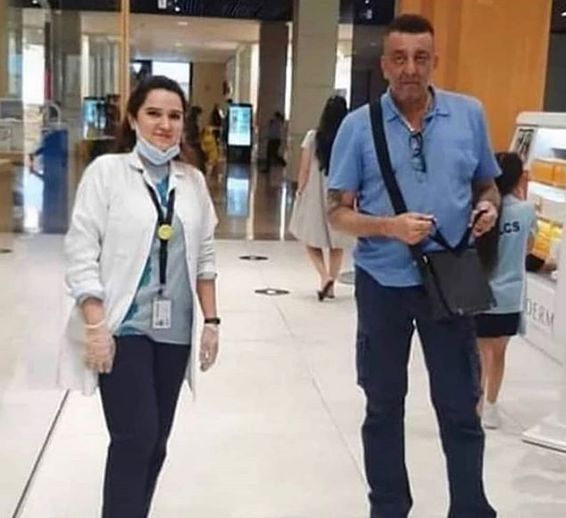 In August, Dutt was diagnosed with advanced-stage lung cancer. According to the Indian media’s report, he has completed his first cycle of chemotherapy.

On Tuesday, an Indian reporter has claimed that Bollywood actor Sanjay Dutt...

To resume Shamshera shoot, Dutt returned to the sets after his chemotherapy.

The actor was being tested and treated at a hospital in Mumbai but had decided to move to the same hospital in the U.S that his mother, Nargis, was admitted to.

The actor had recently joined his family in celebrating Ganesh Chaturthi as photos and videos of the actor went viral just a few weeks back.

The ‘Munna Bhai’ star had been diagnosed with cancer not long ago and a recent picture of him leaving the Kokilaben Hospital Mumbai with his sister Priya Dutt and wife Maanayat Dutt. The actor later confirmed that he had been visiting the hospital for preliminary treatment.

Sanjay Dutt meets his kids after months of lockdown

Star Sanjay Dutt met his kids Shahraan and Iqra after months, as...

Kareena Kapoor reveals her diet and cheat meals during pregnancy

Actress Kareena Kapoor, who is expecting her second baby, has revealed that...

How Shah Rukh Khan will celebrate his birthday this year?

The 'king' of Bollywood Shah Rukh Khan has taken some time out...

13 Years of Jab We Met: Kareena Kapoor shares memory from the sets

Iconic romantic movie ‘Jab we met’ has completed 13 years of its...

Actress Jacqueline Fernandez has celebrated Dussehra by sharing her happiness with other...

How Many Calories You Should Intake For Weight Loss?

Fear of weight gain bothers everyone, but instead of being bothered by...

US Arrests 5 Agents For Allegedly Targeting Opponents Of Chinese government

Five Chinese agents have been arrested in the United States for allegedly...