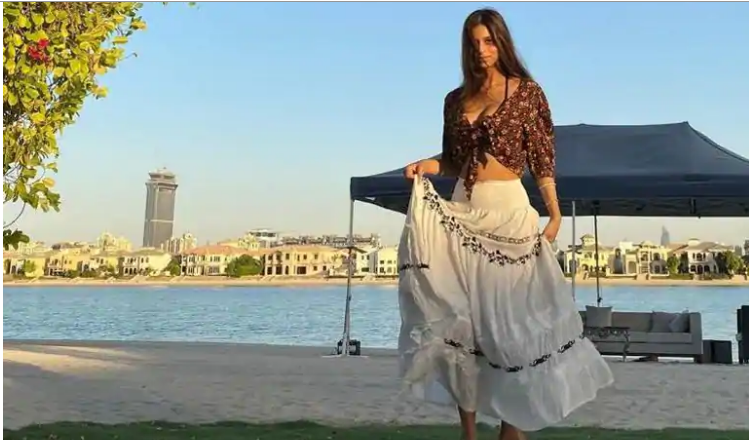 Suhana Khan, the daughter of Shah Rukh Khan, opted for a chic boho-inspired look in her latest Instagram post. She wore a floral crop top with long sleeves and a tie-up feature in the front along with a white long skirt. In her caption, she wrote, “look! me in a skirt!”

The comments on Suhana’s post were limited but many of her friends showered her with compliments. “Ur so beautiful su,” one wrote. “Okayyy bohemian princess,” another commented. A third wrote, “love u and the skirt.” The picture has got more than two lakh likes on Instagram.

Suhana and her family, Shah Rukh Khan, Gauri Khan, Aryan and Abram were in Dubai since September for the recent Indian Premier League. They returned to Mumbai earlier this month.

Suhana had been posting constant updates from their trip, including pictures from Shah Rukh’s birthday celebrations at the Burj Khalifa in Dubai

Suhana wants to follow in the footsteps of her father and enter Bollywood. She made her Instagram account public earlier this year. In September, she revealed that she had been receiving hate comments for her complexion since the age of 12. Owing to this, she emphasised the need to end colourism in a powerful post.

“Other than the fact that these are actual adults, what’s sad is that we are all indian, which automatically makes us brown – yes we come in different shades but no matter how much you try to distance yourself from the melanin, you just can’t. Hating on your own people just means that you are painfully insecure,” she said.

LONDON: Airtel Africa has signed an agreement under which Qatar Holding LLC,...

KARACHI: The Federal Board of Revenue (FBR) on Friday formally launched the...

KARACHI: The businessmen on Friday rejected the decision of the Sindh government...