Varun Dhawan and Natasha Dalal got hitched on 24th January at The Mansion House in Alibaug. A restricted guest list was invited to celebrate their wedding festivities consisting of their close family and friends.

Not only did Varun give a sneak peak of the wedding but he also shared glimpses of the pre-wedding ceremonies.

The newly-wed couple received congratulatory messages from their B-Town friends and several celebrities also extended their wishes to the couple.

Amidst the wishes, Shraddha Srinath also congratulated the pair while making a sarcastic joke.

She took to her Instagram and shared a photo of the couple, writing, “Another good actor bites the dust. Sad that we will not see him on screen again. Obviously his wife and in laws will not be okay with him acting with other heroines. Maybe he will switch to doing male oriented films? But how to balance personal life and work life ya. Tough. Will miss him. Congratulations though, Varun.”

It seems like the actress is being sneery towards Varun Dhawan. 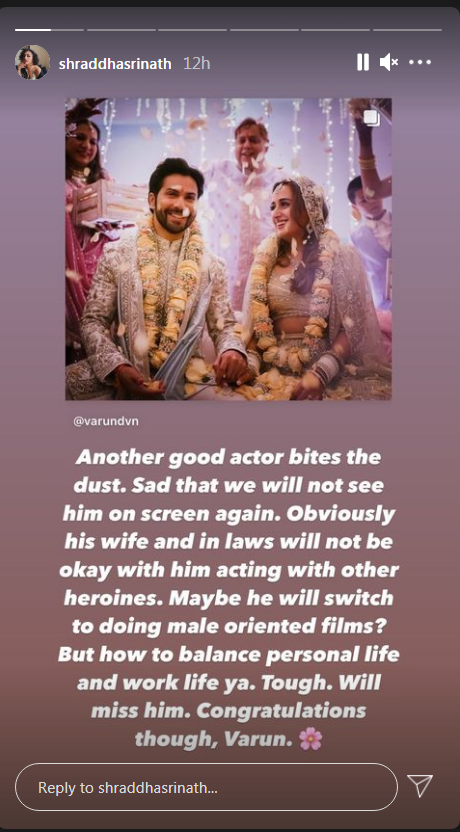 Her post and message depicts the patriarchal state of the Bollywood industry as we often see actresses answering such stereotypical questions when it comes to continuing with work after marriage.

In other news, Anil Dhawan snubbed all rumors about the pair hosting a wedding reception on 2nd February. He said, “Whatever you are hearing is not true”.