Bollywood actress Kareena Kapoor has carried her second pregnancy with grace and elegance.

Apart from being a phenomenal actress, Bebo is considered as B-town’s fashionista. She has always carried out her pregnancy in style wearing the most stylish yet comfy clothes.

Taking to Instagram today, the Bajrangi Bhaijaan actress shared a boomerang and wrote,

The highest-paid actress of Bollywood looks stunning in a sea-green kaftan flaunting her baby bump like a queen.

Netizens fell instantly fell in love with Bebo’s style and filled the comments section with prayers for her and her baby. 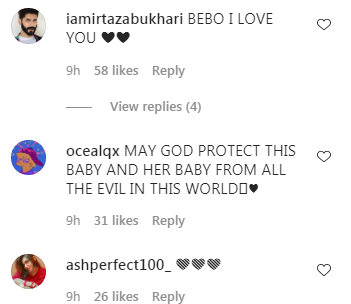 Earlier, Saif Ali Khan had revealed that their second baby is due sometime in early February.

In an interview with a local news source, the Taandav actor said that they have been calm in the last months. He added that he does find it a bit frightening, but it does not match the excitement of little kids running around the house. Saif has confirmed that both are a bit more chilled out during their second pregnancy.

Kareena Kapoor and Saif Ali Khan are parents to Taimur, who was born on December 20 in 2016.

4 Ways to make your nails strong and beautiful

We often tend to overlook the health of our nails. Nails that...

Bollywood playback singer Shreya Ghoshal has shared an adorable picture of her, with baby...