What does Shah Rukh Khan have to say about Salman and Aamir?

Bollywood superstar Shah Rukh Khan offered fans to ask him questions on the social networking site Twitter, after which came a flood of questions for King Khan.

Fans asked Shah Rukh Khan many questions on Twitter to which the actor replied.

In response to a question, Shah Rukh Khan said that now his children are his friends. 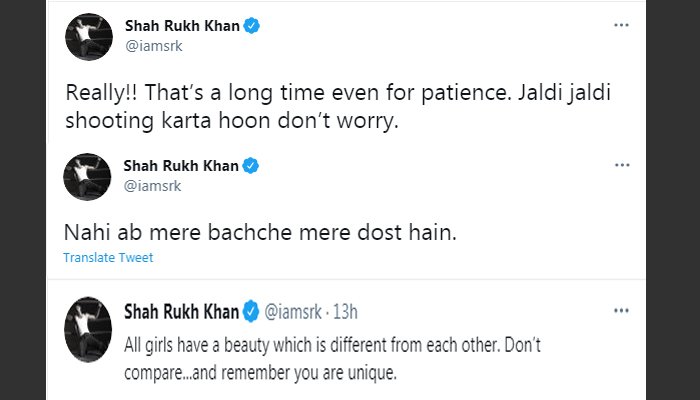 In response to another question asked, Shah Rukh Khan replied saying that “All girls have a beauty which is different from each other. Don’t compare…and remember you are unique.”

Bollywood actress Alia Bhatt has said that she will produce her first...

Priyanka Chopra Expresses Grief Over The Demise Of Prince Philip

Actress Priyanka Chopra Jonas, who has been showcasing her talent in Bollywood...

Actress Twinkle Khanna shares a throwback photo from her teens

What did Sunny Leone receive on her wedding anniversary?

Watch: There Is No Exercise Which Katrina Kaif Can’t Do!

Everyone knows that Katrina Kaif is a workout freak. She loves to...