Actress Radhika Apte Gets Her First Dose Of COVID-19

Actress Radhika Apte Gets Her First Dose Of COVID-19

The actress took her Instagram and shared a picture of herself showing off the arm on which she gets the shot and flexing her other arm. “JABBED #finally #vaccination (sic),” she captioned the post.

While several good wishes she had received in the comments, Apte’s co-star Vijay Varma shared a hilarious meme responding to her post. He took the comment section of the post and wrote, “I posted a story just for u. Pls, check (sic).” 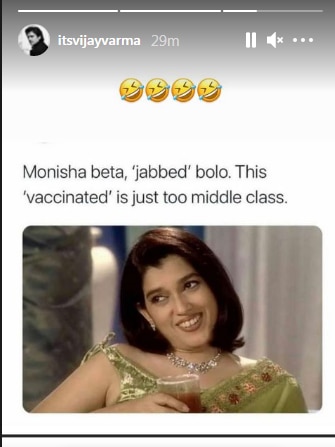 Earlier, a clip from Radhika’s film ‘Clean Shaven’ was leaked with allegations claiming she was in it. The actress however denied the rumours regarding her leaked nude video clip.

Speaking about the role of a sex worker she played in the movie Parched the actress said, “I really needed a role like that because in Bollywood you’re constantly told what to do with your body, and I have always maintained that I would never do anything to my body or face. When a nude clip leaked, while I was filming Clean Shaven, I was trolled badly, and it did affect me. I couldn’t step out of the house for four days. It wasn’t because of what the media was saying but because my driver, watchman, and my stylist’s driver recognised me from the images”.