Is our “Chulbul Pandey” Salman Khan now on Cartoon Network?

Salman Khan took to Twitter and shared the happy news with his fans and followers. In the same, the actor announced the arrival of the animated version of his film Dabangg.

In the Bollywood film Dabangg released in 2010, Salman Khan played the role of police officer Chulbul Pandey who is still alive in the hearts of the fans. However, the animated version of the film will be aired on Cartoon Network from 12 pm noon today.

As soon as Salman shared the news, fans flooded the comment section with love. 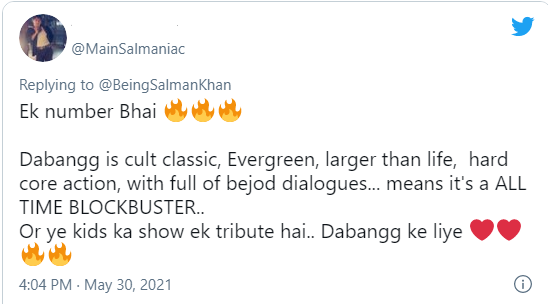 Salman Khan played the role of a police officer in Dabangg while his heroine was played by Sonakshi Sinha who made her debut in the same film. Dabangg was very popular all over the world including India.

Have a look at the body doubles of Bollywood stars Salman Khan, Shah Rukh, Hrithik Roshan and Tapsee Pannu

Bollywood stars are considered superheroes in India. In movies, these actors are...

KARACHI: The post-clearance audit of Pakistan Customs has unearthed an under-invoicing and...

KARACHI: The import of motor cars has surged 167 per cent during...