Actress Kareena Kapoor Khan just dropped a glimpse of her beach avatar from her family vacation as she jetted off with Saif Ali Khan and her sons to the Maldives.

Kareena Kapoor shared a photo enjoying the sunshine in a bikini on the beach in the Maldives to celebrate Saif’s 51st birthday in the tropical paradise. Now, her recent stunning look has netizens going berserk.

She took to Instagram and posted a no-makeup selfie which sent fans into a tizzy. She looks gorgeous in black beachwear in the image, sharing which she described herself as a “beach bum.” 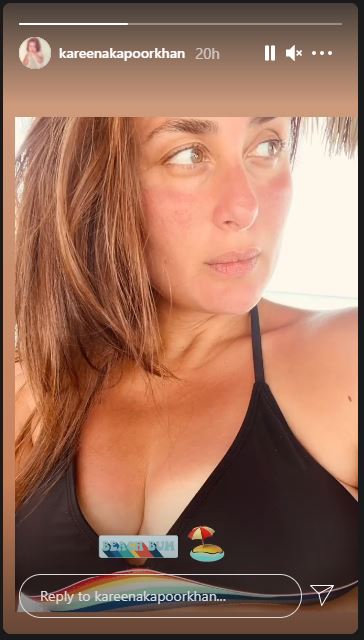 In another photo she shared, Kareena is seen enjoying pool time with Saif. The actress is on a much-needed break after the birth of her second son Jeh.

“Happy Birthday to the love of my life… To eternity and beyond with you is all I want,” she wrote in the caption.

Previously, she joined Saif for a vacay in Dharamshala in 2020 when she was pregnant with Jeh.

Kareena Kapoor made her debut in Bollywood with JP Dutta’s 2000 film Refugee. She is known for her performances in films like Jab We Met, Ra. One, Tashan, Good Newwz, 3 Idiots, Heroine, Aitraaz, Kurbaan, Talaash, Asoka, Bodyguard, Omkara and Veere Di Wedding, to name a few.

On the work front, she will be seen in Laal Singh Chaddha with Aamir Khan. The film is slated to release on Christmas 2021. It is an official adaptation of Forrest Gump starring Tom Hanks.

Bollywood's versatile diva Kareena Kapoor Khan, who jetted off to Maldives with...