UN Secretary General’s Special Advocate for Inclusive Finance for Development Queen Maxima has stressed that financial inclusion is pivotal for the development and economy of Pakistan.

Addressing Pakistan Innovative Finance Forum in Islamabad on Tuesday, she said the financial inclusion will also create more opportunities for the people of Pakistan.

She pointed out that according to a survey, Pakistan has expanded financial inclusion from thirteen percent to twenty-one percent. She said this progress is welcomed. However, she stressed there is great potential for more rapid change particularly for women and the poor.

The Queen of the Netherlands was appreciative of the government’s revised financial inclusion strategy targeting sixty five million active digital accounts by 2023 including twenty million to be held by women.

Also speaking on the occasion, Minister for Economic Affairs Hammad Azhar said the government is committed to increase the financial inclusion and has also set targets for this purpose. This, he said, include hundred percent digital payments of the government. 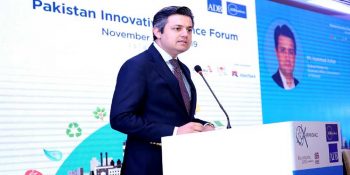 Hammad Azhar said the government is preparing a policy to uplift the small and medium enterprises (SMEs).

The Minister said the government has also taken many other initiatives to promote the SMEs including Kamyab Jawan Program to provide subsidized loans to the youth.

Hammed Azhar noted that SMEs are the backbone of our economy and they have an important role in exports and economic growth.

The Federal Minister said government is also giving special emphasis on ease of doing business. He said Pakistan has jumped twenty-eight points in the World Bank’s Ease of Doing Business Ranking. This, he said, is a great achievement and expressed the confidence that the country’s ranking will further improve next year.

KARACHI: The Pakistan Petroleum Limited (PPL) has made a maiden offer to...

KARACHI: The Union of Small and Medium Enterprises (Unisame) has welcomed the...

KARACHI: To ensure sustainable economic development, it is essential to support and...

KARACHI: The rupee touched the four months low of Rs158.19 against the...

KARACHI: The Federal Board of Revenue (FBR) has granted tax exemption worth...