Justice Aminuddin Khan, senior judge of the Lahore High Court (LHC), takes oath as the judge of the Supreme Court of Pakistan (SCP), here on Monday.

Justice Khan’s elevation has been proposed because of his expertise in civil laws.

The ceremony was attended by judges of the Supreme Court, Registrar and senior lawyers. 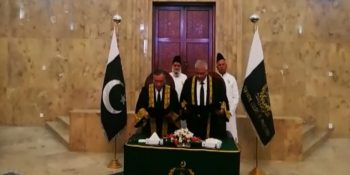 It is to be noted that, the retirement of Justice Sheikh Azmat Saeed left the vacancy of a judge in the SC.

Then, with the appointment of next candidate as the SC judge, 17 posts of judges were completed in the Supreme Court.

Notification for Justice Aminuddin’s appointment as a judge to the Supreme Court was issued on October 16 after the approval of President Dr. Arif Alvi.

Justice Aminuddin Khan belongs to Multan and was appointed as HC judge on May 12, 2011.

He is currently standing on fifth in the seniority list of judges.

The committee considered all aspects of the matter and was of the view that, although the nomination of his lordship was covered under the Constitution, all provinces – especially the smaller ones – should have been given due share in the appointments of judges to the top court in order to remove a sense of deprivation.

The Supreme Court of Pakistan stated that the shooting and torture of...

Justice Ayesha’s appointment to SC, no consensus in JCP

The Judicial Commission Pakistan (JCP) meeting ended without a verdict on Justice...

The police are directed by a local Lahore court to present the...