According to the information provided by the ACE officials, PPSC Bahawalpur’s Assistant Director Furqan Ahmed had been arrested after a suspect, Fahad Ali had identified him

The officials told that Furqan along with the suspect from the finance department, Ghazanfar, would meet with the paper’s buyers.

ACE officials said, a day earlier that one of the suspects, arrested in connection with leaking PPSC’s exam, which he had transferred via USB.

The officials said that they had arrested four suspects involved in leaking the PPSC exam paper “red-handed just two hours before the exams for 58 Tehsildars posts were scheduled to be conducted”.

ACE officials said the investigation revealed that a junior computer operator at the Commission, identified as Waqar Akram, would steal exam papers and transfer the files to a USB drive. “Out of the four people arrested in relation to the scandal, two of them are important members of the gang.”

It should be mentioned here that on Saturday (January 2), the Punjab Public Service Commission (PPSC) had canceled the exam at the last minute for the posts of tehsildar. This sparked anger in the candidates as they staged protests outside exam centers.

According to the details, PPSC posted the notice just 30 minutes before the start of the exam. The commission said the exam was canceled due to “unavoidable circumstances”.

Candidates across the country came to give the exam despite the cold weather protested outside the centers and alleged that the exams for tehsildar were canceled after a paper was leaked.

It is pertinent to mention here that almost 104,000 people had applied for the 58 posts of tehsildar and assistant collector.

A new date will be announced soon. 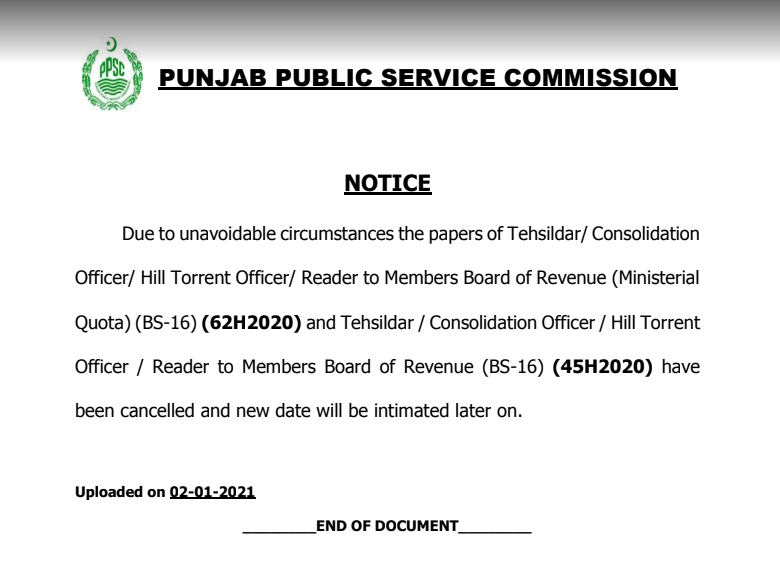 On Saturday, the Punjab Public Service Commission (PPSC) has cancelled the exam...

Matric, Inter Annual Exams To Take Place From May 20 & June 20

Sindh Education Department said Wednesday that the matriculation and intermediate exams are...

Students of different universities protested outside Punjab Governor House and demanded to...

Federal Minister for Education Shafqat Mahmood has said that the schools will...

On Thursday, the Federal Minister for Education and Professional Training Shafqat Mehmood...

On Saturday, Chief Minister of Punjab Usman Buzdar has approved an Rs740...

Khabib Mocks McGregor after his shocking defeat by Dustin Poirier

The unbeaten Russian Khabib Nurmagomedov has mocked Conor McGregor after his defeat...

The Calhoun County Deputy has been fired for arresting a black man,...

‘Opposition has no strategy against PTI Government’

Federal Minister for Science and Technology Fawad Chaudhry said on Sunday that...