Karachi Board To Issue Admit Cards For Classes 9, 10 From May 31st

On Friday, the Board of Secondary Education Karachi (BSEK) has announced that it will be issuing regular admit cards of the ninth and matric students for upcoming board examinations.

Syed Sharaf Ali Shah, BSEK Chairman, said that Science and General group’s admit card will be issued from May 31 onwards.

“Admit cards of science and general group’s regular candidates are being issued right now. The date for issuance of admit cards for private candidates will be announced later,” said the chairman.

Shah said that on the scheduled dates, schools’ heads or their representative can collect students’ admit cards with an authorization letter and their CNIC copy or their office cards. 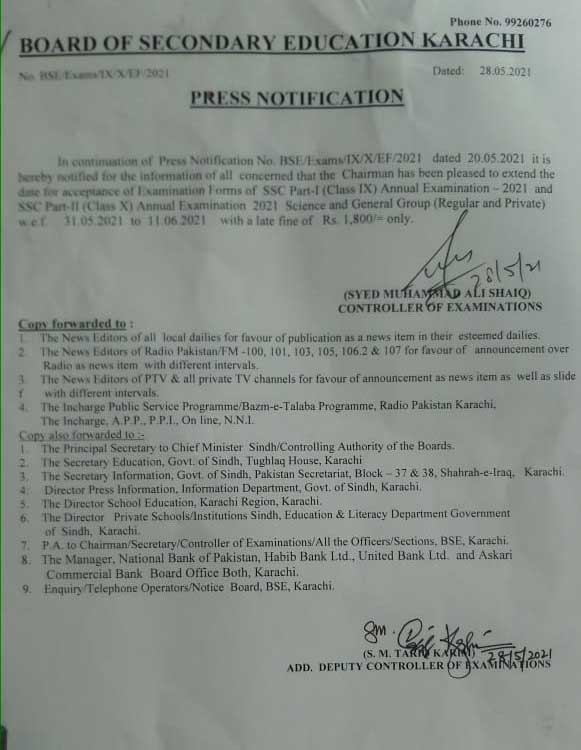 Admit cards can be collected from 9:30 am onwards till 1:00 pm from the conference hall located on the first floor from block B of Matric Board’s office.

Schools located in New Karachi, North Nazimabad, Gulberg, Liaquatabad can collect the cards on May 31; while schools in Jamshed Town, Gulshan-e-Iqbal can do so on June 1. The schools located in Shah Faisal Colony, Malir, Bin Qasim, Landhi, Korangi can collect on June 3; schools in Saddar and Lyari will be able to collect the admit cards on June 3.

Schools’ heads from Kemari, Orangi, Site, Baldia, and Gadap can collect the admit cards of their students’ on June 4.

BSEK urged everyone to wear a mask and follow all the COVID-19 SOPs before coming to collect the admit cards.

Earlier, the National Command and Operation Centre (NCOC) had decided in principle that board exams across the country will be held this year amid the third wave of novel coronavirus.

According to the details, the decision was taken in an NCOC meeting held in Islamabad with Planning Minister Asad Umar in the chair.

The health ministry officials briefed the participants of the meeting about the current situation of Covid-19 in the country. However, the NCOC has decided to refer the matter of re-opening the educational institutes to the Inter-Provincial Education Ministers Conference (IPEMC).

All educational institutions across the country were closed earlier this month till May 23 to contain the spread of Covid-19.

According to sources, the IPMEC will hold its meeting before May 23 and in the first phase, schools would be open for students of classes 9th, 10th, 11th, and 12th.

The National Command and Operation Centre (NCOC) has decided in principle that...

Inter-Provincial Education Ministers Conference has been convened tomorrow (Wednesday). According to the...

Schools To Reopen In All Districts Of Punjab From Tomorrow: Murad Raas

Punjab's Education Minister, Murad Raas has announced on Sunday that schools for...

The National Command and Operations Centre (NCOC) announced on Saturday that the...

O level exams to be held from July 26: Shafqat Mahmood

Federal Minister Education Shafqat Mahmood on Thursday has made a new announcement...

Inter-Provincial Education Ministers Conference is scheduled to be held tomorrow (Monday). According...