Hamza Ali Abbasi to tie knot with Naimal this month

Pakistani actor Hamza Ali Abbasi who turned an activist and recently returned from Hajj, is getting married to ‘Anaa’ star Naimal Khawar.

A wedding card has been circulating on social media and claims that the two are tying the knot on Sunday, August 25.

According to the card, the Nikkah ceremony will be on Sunday and the Valima reception to be on Monday, August 26. 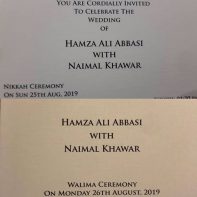 The duo has been spotted together on various occasions before, most notably when Hamza showed up at Naimal’s art exhibition recently.

He wrote, “I planned to say this after 25th but since the news is already out so here I go. Yes I am deliberately using this public attention to me & Naimal getting married to put a message across. I say these words with the sole intention that anyone who is going thru the same turmoil & making the same efforts as me might take encouragement & get reassurance.”

He posted too long which shortly revealed that they are tying knot this month.

Hamza posted, “So yes me & Naimal are having our small Nikkah on 25th & a small Valima on 26th and then looking forward to a lifetime together in making efforts to please Allah together. Pray for us. Thankyou.”

Naimal Khawar is a graduate of the National College of Arts and she can be spotted on television as Izza in the popular drama serial Anaa.

Hamza Ali Abbasi is all set to make his comeback as a TV actor with Alif.

Leading Pakistani actress Hania Aamir has once again come under fire from...

What trait did Angelina Jolie inherit from her mother?

Famous Hollywood actress Angelina Jolie, in a recent interview, spoke about how...

Ayeza Khan shares an insight into her busy life

With having so many commitments in her busy schedule it is safe...