Naimal Khawar did her own Hair & Makeup on her Nikkah

After marrying Pakistani actor Hamza Ali Abbasi, former actress Naimal Khawar Khan revealed in her Instagram post that she wore her mother’s wedding dress and did her own hair and makeup on her Nikkah.

“The moment I realized I’m getting married, I knew I wanted to wear my Amma’s Nikkah jora. I have always been drawn to old world charm and the nazakat of bridal joras from back in the day. There is also a certain emotional attachment that comes with wearing you mother’s jora,” Naimal Khan wrote. 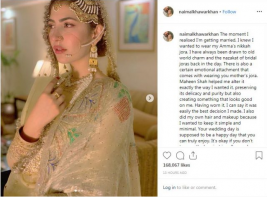 “Maheen Shah helped me alter it exactly the way I wanted it, preserving its delicacy and purity but also creating something that looks good on me. Having worn it, I can say it was easily the best decision I made.”

“I also did my own hair and makeup because I wanted to keep it simple and minimal,” she continued. “Your wedding day is supposed to be a happy day that you can truly enjoy. It’s okay if you don’t want to wear the heaviest jewelry and would rather keep it a little light.”

“Your comfort and happiness is the most important thing”, Naimal wrote.

Hamza Ali Abbasi and Naimal Khawar Khan’s simple Nikkah ceremony was held in Islamabad on August 25 and was attended by family and close friends who prayed for the newlyweds. 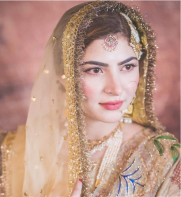 On August 26, a star-studded Valima ceremony [reception] of both stars was held in which prominent personalities including DG ISPR Asif Ghafoor and Atif Aslam participated.

In a post on social media, the actress said that ‘Anaa’ will be her first and last drama serial and that she will not be performing in any drama after that.

I like to paint and will concentrate on it, she announced.

Who was Sarwat Gilani’s first friend?

TV and film industry actress Sarwat Gilani has expressed her love for...

Pictures of model Alyzeh Gabol with her daughter go viral

Alyzeh Gabol, one of the most popular model and actress in the...

Pakistan Put A Ban On Travellers from India Amid New Variant

The National Command and Operations Center (NCOC) has banned the entry of...