Rahma accuses step mother of taking away her father’s body

Rama Ali, the daughter of veteran Television actor Abid Ali, who passed away yesterday, has accused her stepmother Rabia Noreen, of taking away her father’s body from the hospital and restricted the family from attending his funeral.

She posted a video on her Instagram handle in which Rahma Ali said that she wants to tell the world that her stepmother, Rabia Noreen, took her father’s body from the hospital with her without informing us.

Rahma Ali said her stepmother told her aunty that she could not let us attend the funeral and we were not even told when and where the funeral is.

Abid Ali’s elder daughter posted on her Instagram about the funeral prayer. She wrote that her father’s funeral would be offered in Ashiqad Bahria Town after Friday prayers. 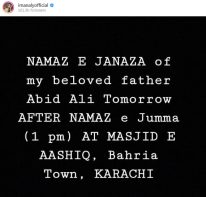 It should be noted that after the second marriage of the late TV actor Abid Ali, his daughters Iman and Rahman were very upset with their father, and in this regard they also expressed their disappointments in various TV programs.

Senior actor Abid Ali first marriage with actress Humaira Ali, with whom he has three daughters, Maryam, Iman and Rahma.

Abid Ali’s second marriage to actress Rabia Noreen took place in 2006, after which he separated from his first wife, Humaira Ali.

Yesterday, The legendary TV actor Abid Ali died at the age of 67 after prolong severe illness.

According to details, the wife of actor Abid Ali, Rabia has confirmed his demise.

Legend actor Abid Ali was 67 years old and had long been suffering from liver disease admitted at a private hospital in Karachi.

His wife said that my husband Abid Ali is no more, I urge everyone to pray for his forgiveness.

Abid Ali’s daughter Rahma Ali also shared the news of her father’s death on Instagram. She wrote, ‘My father took his last breath in my hands. Sorry for not picking to anyone’s phone calls right now. However, she promised to release the news to the media, yes he is gone, she wrote.

Rabia Abid’s sister shared, “This news that all the channels are showing, copying each other without any research on their part and circulating this ridiculous unverified information to the public, is wrong. This is absolutely wrong! They should be ashamed of themselves and they should be punished for it.”

She went on to say, “Abid Ali is alive. Yes, he is unwell and yes, his condition is critical, but he is still alive and may he get better.”