Mahira Khan achieves another milestone as she hits 5 million followers

The stunning Pakistani film actress, Mahira Khan is not coming slow as she achieved another milestone in her acting career.

Mahira Khan hits five million followers on Instagram, becoming the first Pakistani celebrity to do so.

With international appearances and brand ambassadorships and a heap of money, Mahira is now the biggest Instagram personality in the country.

Mahira’s popularity seems to be growing each day, thanks to her endless outings globally.

With five million followers on Instagram, Mahira is closely followed by Sajal Aly and sisters Aiman and Minal Khan, who are also just a little under the five million mark.

The Raees starlet’s fame skyrocketed after her debut at the Cannes Film Festival that came in 2018.

Dressed in a leather jacket, skinny black jeans and a white shirt with coiffed hair, Mahira was every inch the superstar on the ramp. 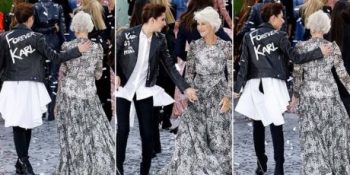 She was joined by US singer Camila Cabello, Indian actress Aishwarya Rai Bachchan, British actress Helen Mirren, US actors Eva Longoria and Amber Heard and many others.

Not only did she walk the ramp, but Mahira also danced with Helen Mirren on the runway during the “Le Defile L’Oreal Paris” show as part of Paris Fashion Week.

Mahira Khan also hung out with Cabello and Longoria after the show.