Shaz Khan has become a MMA fighter for his film

Shaz Khan has become a MMA fighter for his film

Famous Pakistani actor Shaz Khan has become a Mixed Martial Arts (MMA) fighter for his new film.
According to the details Shaz Khan’s fans will see him as MMA fighter in his upcoming film ‘The Martial Artist’.
The actor shocked everyone on social media. 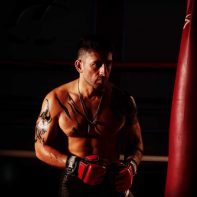 The sources said, The Actor Shaz Khan got a training of boxing, Jiu-jitsu, and Muay Thai.

After a long time, the actor updates his post on social media.
He said on Instagram, “Nothing annoys people more than being off social media for two months without a valid reason:) This is what has been cooking on creative side during the digital vacation…”

Nothing annoys people more than being off social media for two months without a valid reason:) This is what has been cooking on creative side during the digital vacation… #preparation #martialartist #choreography #cinema

Shaz Khan recently appeared on the Internet to show his skills after training in mixed martial arts.
The actor continues the training of martial arts in California where he was coached by MMA champion Rafael Cordeiro.

The shooting for the new upcoming film started last year, with more details still to be revealed.
The actor has also written the script of this movie.
According to him, the film is based on the story of a native martial artist based in California but eventually return to Pakistan.

Last year the actor also announced the completion of the script of his movie.

In the announcement he also revealed that the story of the film belongs to the story of his short film which was released in 2016,