American Couple get married in Hospital

American Couple get married in Hospital

In the US state of Texas, the young boy became involved in a marriage bond at the hospital, setting the example of love for his father.

According to the details, the father of the young groom is not only admitted to the ICU due to critical condition but also has been completely instructed by doctors for walking.

According to sources, doctors refused when the bride and groom’s family asked doctors to grant permission to sick father to attend their marriage due to father’s severe critical condition. 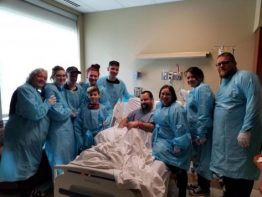 Taking this situation into account, the groom decided that he would perform the first ritual of starting a new life in the hospital with his father.

Just then, the groom rushed to the hospital with his bride and closest relatives where wedding rituals were performed in front of the ill father.