Dr. Amir Liaquat Hussain, who has the knack for capturing media attention and knows how to stay in the spotlight.

Whether it is his infamous off-screen antics caught on camera, his strange social commentary on trending issues, politics, or his love life.

Recently, the former Inaam Ghar host posted a video on social media in which Amir read some poetry.

But enough about that poetry. Apparently it was upstaged by Amir Liaquat’s ‘fabulous’ sweatshirt.

Pakistani netizens took to Instagram to share their thoughts on Amir’s outfit. Some trolled the former host while some surprisingly loved this new look. 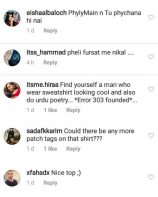 Earlier, Aamir Liaquat Hussain’s second marriage to Tuba Aamir created quite a buzz. The popular host tied the knot for the second time to Tuba last year in November.

Aamir’s second marriage and his take on his first wife, Bushra, stirred quite a controversy. However, seems like Aamir is yet again ready to tie the knot.

Aamir and Tuba made an appearance at actor Fiza Ali’s talk show where he proposed to the actor, in front of his wife.

As soon as Fiza Ali announced the couple to enter the stage, she asked Tuba if she could stand besides her husband. To this, Aamir joked, “It could have been you who would have been announced to come with me, but you’re a little late.”

In a recent interview, Fiza revealed how Aamir had proposed her earlier as well.

“Aamir sahab is a great person. He has a clean heart and he is a very jolly kind of person. He does not keep anything in heart, he says what he thinks,” she said.

“He came on the show and joked about it again. He said it’s not too late to get married,” Fiza laughed. “He said Tooba has no problem with it.