Carrie Symonds looked elegant in a sari as she joined Boris Johnson in a Hindu temple for the couple’s first joint visit of the election.

The Prime Minister, who is ratcheting up his campaigning ahead of Thursday’s crunch ballot, beamed lovingly at his girlfriend who he has not been seen publicly with in over a month.

Ms. Symonds has instead been criss-crossing the country with her adopted dog Dilyn in a blitz of marginal seats where Tory victories are crucial to her boyfriend clinching a majority. 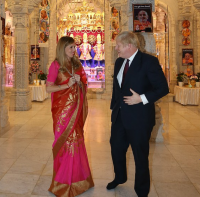 Since the Downing Street couple’s last appearance at the Tory election launch on November 6, their relationship has come under the campaign spotlight.

Despite the PM’s consistent attempts to swat away questions about his private life, he has nevertheless been grilled by broadcasters on whether he is a ‘family man’.

But the couple silenced the critics on Saturday with an all-smiles trip to the temple where they were pictured laughing together and worshippers.

Mr Johnson, who removed his shoes as is customary, will be buoyed by the Mail on Sunday’s final poll of the election which puts the Conservatives 11 points ahead, just one point down on the party’s lead in the first survey at the start of November.

The threat from Jeremy Corbyn’s spendthrift policies, such as the offer of free broadband and discounted train fares, has also been negated by the Tories’ ending their regime of austerity and ploughing billions into public services such as the NHS.