The legendary singer known for her semi-classical Urdu ghazals, songs and classical thumris.

Bano was born in Delhi in 1938, she studied with Ustad Chand Khan – a master of classical Indian vocals.

She began singing on All India Radio as a teenager.

The singer also known for her defiant performance of protest poetry by Faiz Ahmed Faiz.

She was one of the best singers of classical music.

She also made the brilliance of her voice and her command of musical notes.

Iqbal Bano became an icon of dissent when she sang Faiz’s ghazal ‘Hum Daikheingay’ in February 1985. 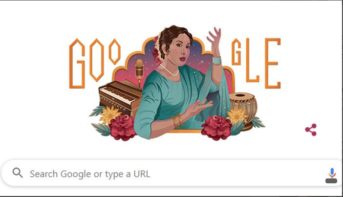 Google honours prominent personalities and occasions with special logos that it calls ‘doodles’.

She could also sing Persian Ghazals with the same eloquence.

She was born in Dehli in 1935 and later moved to Pakistan after partition.

Bano showed her interest in music at an early age and learned classical music, including Thumri and Dadra from Ustad Chand Khan.

She started her career from Radio Pakistan Lahore in 195o, and also sang the songs ‘Payal Main Geet’ and ‘Ulfat Ki Nai Manzil’ for the films Gumnaam (1954) and Qatil (1955).

She has left behind her legacy that continues to live on through the extensive body of work.