Some of Selena Gomez recent circulating pictures from Paris orives that she is the ultimate style icon.

Selena Gomez manages so well to make even a nightwear look chic as she stepped out in a lace slip dress and a black coat and was nothing short of absolutely breathtaking.

The singer arrived at the city bringing up her glam game after her sartorial picks from London had also turned heads all around.

The 23-year old Selena Gomez stepped out in all-black for her NRJ radio interview as she paired the lace slip dress with a velvety back studded coat, with black heels, which looked so elegant.

Selena Gomez makeup was simple and striking as she kept the lips nude with her bold smokey eyes while her hair were tied back in a messy braid and a fringe on the forehead. 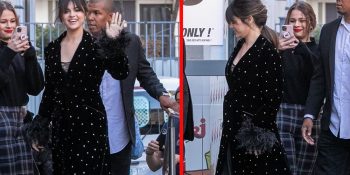 Earlier, her looks from London ranging from faux fur Mango coat to glittery gold pants had all grabbed headlines and left fans in awe of the fashionista.

After appearing on the children’s series Barney & Friends (2002–2004), she received wider recognition for her portrayal of Alex Russo on the Emmy Award-winning Disney Channel television series Wizards of Waverly Place, which aired from 2007 until 2012.