Sofia Vergara prepared for Christmas by doing a spot of holiday shopping done at the Saks Fifth Avenue department story in the Big Apple.

Sofia looked casually chic for her outing, as she wore an oversized grey jumper over a pair of straight-leg denim jeans.

The actress’ trousers had distressed hole detailing while she stepped out in a pair of black trainers.

She pulled her brunette locks back into a messy ponytail, and wore a natural palette of make-up to enhance her pretty features.

Sofia Vergara’s hit show Modern Family is currently airing its final season on ABC, with the finale expecting to premiere in 2020 as it will pause for the holidays.

Earlier, Sofia Vergara had graced her fans with the knowledge of yet another one of her many talents.

The top-earning actress a video of her performing said talent with her 17.7 million social media followers bringing joy and laughter to fans and famous friends alike with her short clip.

In the video, Sofia was seen chilling in a makeup chair enjoying some delicious cake as her makeup artist comes up from behind and calls her out on the fact that her always perfect makeup was finished, but that she was eating.

He says, “Sofia, I just did you lip. Literally every time I do your lip, you’re always eating cake.” 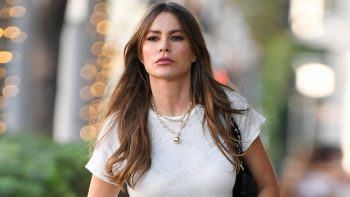 Her makeup artist says “Alright,” as he has lost this battle with her.

Sofia had also celebrated her dog Baguette’s sixth birthday and a super epic and glittertastic Thanksgiving event with her family.

Sofia Vergara is an exceptional mother to her son Manolo Gonzalez.

Canadian tennis star Milos Raonic has announced his withdrawal from Wimbledon due...

Babar Azam becomes the first player to score 500 runs in a...