A model is taking legal action against the Miss World beauty pageant after she was disqualified for being a mother.

Veronika Didusenko is banned from taking part in the contest on 14 December because she has a five-year-old son, having lost her 2018 Miss Ukraine title for the same reason.

She was stripped of that honour hours after she had won it, with her status as a divorcee also counting against her.

The organizing committee explained that the Miss Ukraine and Miss World competitions have the same rules because whoever wins the former goes on to represent her country for the global title.

My dear followers!❤️ ⠀ I’m so impressed, happy, proud and overwhelmed with our media coverage in the UK🇬🇧. ⠀ I can’t believe we could raise so much awareness to our campaign #righttobeamother which aims to change the discriminatory entry requirements of international beauty pageants to allow all women to participate. ⠀ I would like to see #missworld @missworld and the other global running beauty pageants which seem to be stuck in the dark ages lift all entry restrictions so that these competitions are truly representative of all women in society today🌍. ⠀ Thousands of people have supported my campaign #righttobeamother across social media and I regularly receive thank you notes. I’m grateful to each one of you!!! Nothing would happen without your support, inspiration, help, courage, all of the stories you shared with me. ⠀ THANK YOU!

“The reason I was not allowed to compete in Miss World after winning the title #MissUkraine is because I had been married and have a child,” she wrote on Instagram.

The rules of Miss World ban mothers and married women from taking part in the beauty pageant and oblige the contestants to sign a corresponding agreement. 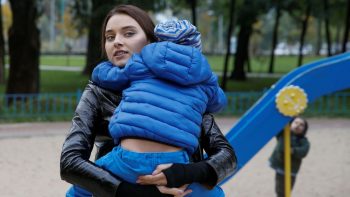 The 24-year-old was crowned Miss Ukraine in 2018, but was stripped of her title just four days later when it was revealed she was mother to Alex, now five, and was divorced.

The move sparked widespread controversy and outrage with many claiming it was “discriminatory” and “outdated”.

Ms Didusenko said, “I didn’t expect to win and I didn’t have any intention to win because I have a professional modelling career, I have a pretty busy life… When it happened I was shocked”.

On Wednesday, Eminem's daughter Hailie Jade has achieved a milestone as she...

Famous singer and former One Direction member Zayn Malik announced that he...

Singer Halsey, who has been named one of Time's 100 Most Influential...

Has Alizeh Shah broken up with Noaman Sami?

Pakistani actors Alizeh Shah and Noaman Sami are the inspiration of many...

Pakistani actress Ayesha Omar is one of those actresses of the entertainment...

Noor Zafar Khan, a Pakistani actress who has been appreciated for her...

Today UAE Dirham to Pakistan Rupee conversion is based on open market...

Today SAR TO PKR conversion is based on open market rates which...