The two have reportedly chosen the chilled month of December to fulfill their dream as a couple.

Iqra and Yasir are all set to tie the knot this month before the year is over.

According to reports, the festivities will start from December 25 and continue till December 28.

The celebrities had shocked their admirers at the 18th edition of the Lux Style Awards, when Yasir Hussain went down on his knee and proposed long-time girlfriend Iqra Aziz.

Taking to Instagram, Iqra shared her wedding invite confirming that the two will be tying the knot on December 28, 2019.

This card is the funniest thing you will see today.

The duo is indirectly addressing their well-wishers who give them unsolicited advice all the time. 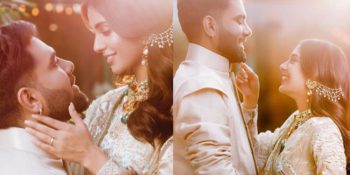 Earlier, the 21-year-old Iqra Aziz celebrates her birthday on November 24.

Yasir Hussainshared the sweet news with his fans along with a picture of himself with her. The photograph showed them in a playful mood.

Yasir had earlier also hinted at their probable marriage back in June during an Instagram Q&A session where he was asked about his plans of getting hitched in 2020.

The starlet in a post on Instagram wrote, “Happy Birthday to my one and only super hero and super amazing human. I love you and may you have all you deserve and wish for.”

As Yasir turned a year older, the actor not only received plenty of wishes from his fans but also from the media fraternity.