Pakistani celebrity couple Ahad Raza Mir and fiancée Sajal have become the talk of the town as most admired stars of the TV screen.

They both broke record popularity in their drama serial Yaqeen Ka Safar, and Aangan. 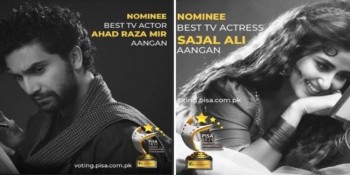 They have nominated for their outstanding performance in drama serial Aangan.

Earlier, actress Sajal had shared on Instagram story about her nomination as ‘Best TV Actress’.

Recently, Sajal celebrated her 26th birthday and received love and best wishes from her fans and family.

The couple announced their engagement in June last year.