DiCaprio and Morrone spotted waiting for their yacht to collect them.

But, a viral photo from their outing left quite a lot of eyebrows raised.

The model, in the viral photo, sitting next to Leonardo DiCaprio in the isle of St Barts when the moment captured on camera. 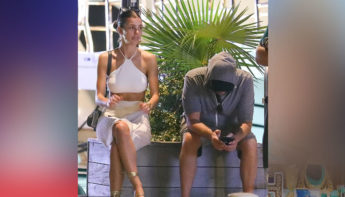 Interestingly, the actor left some people in a haze as he ignores his girlfriend.

He spends the romantic evening digging deep inside his phone instead.

Leonardo, seemed captivated by his cell phone, while Camila Morrone sat patiently at his side.

Camila Morrone dressed in a white crop top with a halter-neck style tie and a high-waisted knee-length skirt.

She was a sight for sore eyes but was unable to snag her boyfriend’s attention who was busy with his cellphone.

Camila finished the look with golden hoop earring while Leonardo dressed down in a casual sweatshirt with the hood up and knee-length shorts.

Are you waiting for Leonardo, Morrone Marriage like DiCaprio’s mother?

Since the holiday season was in full swing, it has set the trend of people getting married and engaged.

Camila in 2018 did a lead role in Never Goin’ Back film. She also seen in Death Wish film.

Likewise, she appeared in Mickey and the Bear as Mickey Peck.

Also, recently been cast by the upcoming Amazon series, Daisy Jones & the Six made on the same entitled novel.

Morrone and Dicaprio are in a relationship since December 2017, even though they have a huge 22-years age gap.

People often make them a spot for critique on this age gap on Instagram.

She responded on Instagram, “I just think anyone should be able to date who they want to date. I probably would be curious about it too.”