AR Rehman unhappy with remixes of his songs, calls them annoying

Renowned singer and musician AR Rehman speaks about the remixes of his song and revealed that he gets irritated as the remixes are disastrous and annoying.

During an interview, AR Rehman opened up and made some revelations regarding his musical journey in the industry.

He also admitted that h gets irritated hearing the remixes of his songs.

He admits talking to a company and expressed his fears of being trolled for his remixes.

AR Rehman termed these remixes as disastrous and annoying.

The legendary musician revealed that he was busy composing music for Tamil films and his own productions.

He also said that he is building a studio and spending time with his kids whom he wants to nurture as future musicians.

The music maestro who has a tremendous fan following not only down in the South but also in the Hindi film industry is currently busy with a movie which has been backed by Aanand L. Rai.

She wrote that it was her choice to wear what she wants and that she feels empowered by wearing a burqa.

Her post reads: “Been only a year and this topic is in the rounds again…there’s so much happening in the country and all people are concerned about is the piece of attire a woman wants to wear.

Wow, I’m quite startled. Every time this topic comes the fire in me rages and makes me want to say a lot of things…Over the last one year, I’ve found a different version of myself which I haven’t seen in so many years.

I will not be weak or regret the choices I’ve made in life. I am happy and proud of what I do and thanks to those who have accepted me the way I am.

My work will speak, God willing… I don’t wish to say any further”.

The post further read, “To those of you who feel why I’m even bringing this up and explaining myself, sadly it so happens and one has to speak for oneself, that’s why I’m doing it.

Dear Taslima Nasreen, I’m sorry you feel suffocated by my attire. Please get some fresh air, cause I don’t feel suffocated rather I’m proud and empowered for what I stand for. 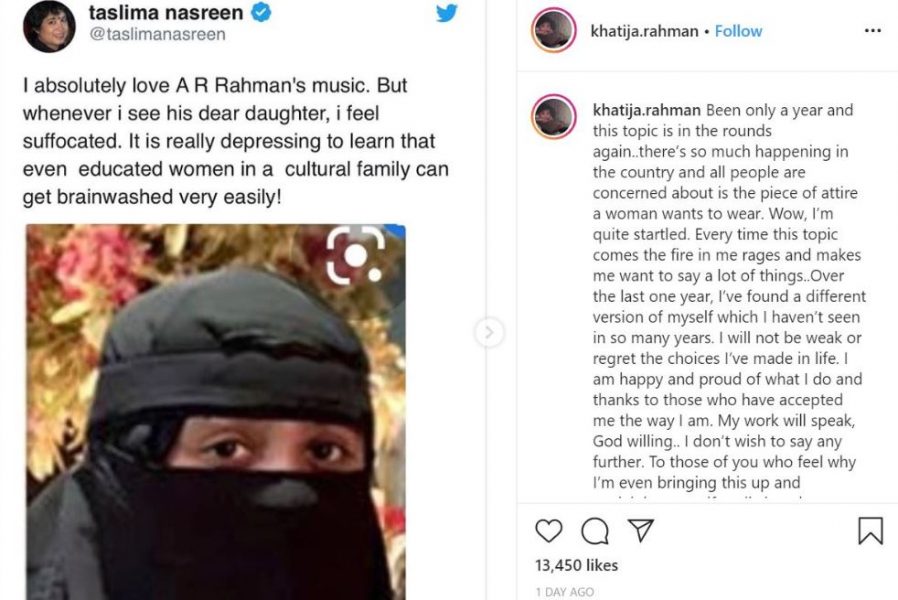 I suggest you google up what true feminism means because it isn’t bashing other women down nor bringing their fathers into the issue. I also don’t recall sending my photos to you for your perusal”.

Khatija Rehman’s strong response came after Taslima Nasreen took to Twitter to share her photo and her thoughts on wearing a burqa.

She wrote that she feels suffocated when she looks at Khatija Rahman wearing a burqa. “I absolutely love A R Rahman’s music. But whenever i see his dear daughter, i feel suffocated.

It feels really depressing to learn that even educated women in a cultural family can get brainwashed very easily,” wrote Taslima.

AR Rehman trolled by social media users after Khatija had appeared in an even with him wearing a burqa.

However, then the composer had explained that the women in his family are free to wear whatever they want.