Singer-turned actor Rabi Peerzada has been acquitted in the case against having exotic animals.

A district and sessions court acquitted Rabi Peerzada in Lahore yesterday in the case that involved illegal ownership of crocodiles, snakes and other exotic animals. 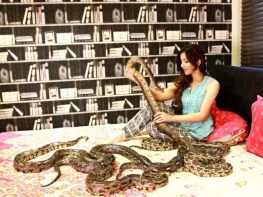 Rabi Peerzada announced after the verdict that she will begin an awareness campaign with the wildlife department for the security of animals. 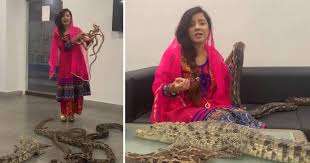 Earlier, a case was filed against Rabi Peerzada by the Wildlife Department for illegally keeping snakes and crocodiles as pets. The case was filed after she posted her photos with exotic creatures.

Rabi Peerzada is all set for a new beginning

Actress and pop singer Rabi Peerzada has started a new life after her controversial pictures and videos got leaked on social media, BOL News reported on 11th November 2019.

According to details, the actress announced to quit showbiz after she was constantly criticized on social media for her private videos, which got leaked.

Now Rabi Peerzada has posted a message on social networking website Twitter that she is starting a new life.

Not only that, she also shared some of the paintings of Kaaba in her tweet as well. Paintings are assumed to be made by the actress herself.

It is to be noted that the immoral videos of the singer on social media went viral after which she became a top trend on Twitter.

Rabi Pirzada also wrote a Quranic verse at the end of one of her tweets saying that honor and humiliation is only in the hands of Allah.

The FIA denied the removal of Rabi’s photos and videos from social media websites, saying it is the duty of Pakistan Telecommunication Authority (PTA) and the request of the singer in this regard has been forwarded to the PTA.

According to the details, she had approached the Federal Investigation Agency (FIA) after her private videos went viral on social media.

Pakistan's charming actress, Mehwish Hayat, has appeared to be a true beauty...

Bol news is  all set to celebrate "Surprise day" with a transmission...

A mosque in Ashok Nagar, in Indian Capital Dehli has been set...

Amid excavation survey of Pakistan's ancient Bhanbhore city, Archaeologists from Italy and...