Aurat march is going to be organized soon and a huge debate is seen on media whether the mass gathering fulfills the purpose or not. Several controversies and arguments were seen.

However, the organizers of aurat march on Tuesday gathered at Karachi Press Club to demonstrate the agendas of holding the march. Several matters were discussed.

They said, “Unfortunately, to date, there has been no transgender rape law made in Pakistan,”

End sexual harassment and violence – in schools and homes, at work places and from state institutions.

Shahzadi wants the authorities to make a separate law for rape. They said that trans are even being humiliated by the policemen when they go for FIR.

She demanded that that issue must be solved with strong political interference.

“Trans persons should have representation, whether in province or centre,”

They added that the government had announced a 5% quota since 2010. But no Implementation was seen. The transgender commission was also not formed.

In addition to this, they also said that there is no separate jails and law for transgenders.

They said that “We are called for inaugurations, but the government does not hold any discussion with us,”

She said that the reproductive and sexual cycle is the fundamental right of humans. She said that women must have the authority to exercise some agency over their bodies.

Shama Dossa said, “In Pakistan, the maternal mortality rate is 276, which is a cause of extreme shame for us. Every 37 minutes a woman dies,” this happens due to lack of awareness.

Journalist Uzma Karim was also present at the gathering. She focused on the role of media in promoting women’s rights. She said that journalists have the responsibility to present sensitive issues of women with care. 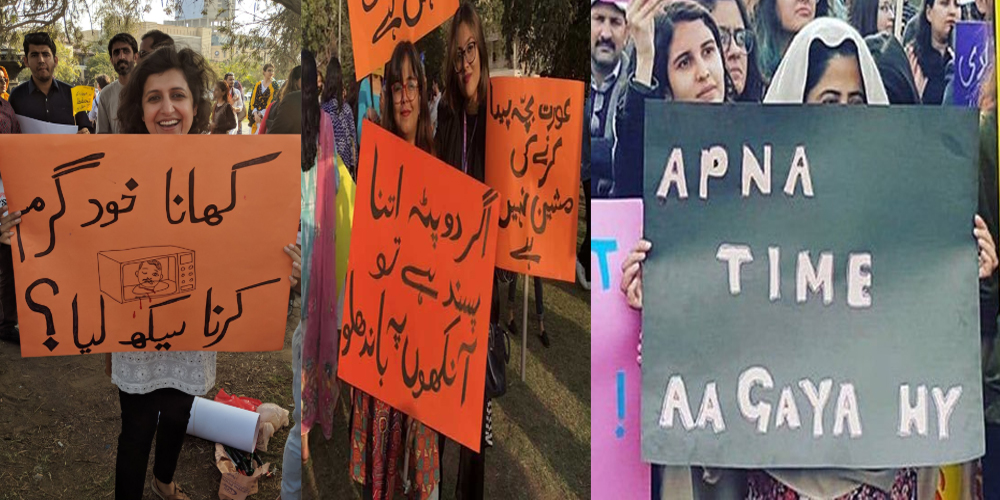 Ghazala Shafiq, a minority rights activist, said that minorities are compelled for forced conversions. She said, “Conversion happens in one day, and in the same day marriage takes place,” she said that the bill for the forced conversions has not been passed.

Women and the economy

Afshan Subohi, a senior finance journalist, spoke over women’s participation in economic matters. She said, “Nobody knows better than homemakers how to resolve issues with the least resources,”

She told about the figures and said that only 30% of women bring productivity.

Social researcher Nazish Brohi said, “If we find the demands of women controversial, at one time women having own CNICs was controversial too,” she said this while speaking on women’s participation in political affairs.

Aurat March Demand 5 – Right to City
We demand access to electricity, gas, clean water, healthcare, education and safe transport for all persons, and the resettlement of the persons displaced by the inhumane city-wide Anti- Encroachment Drive.#wedemand #Auratmarch2020 pic.twitter.com/5jhBaMwgLF

The Firm is apparently becoming concerned about Meghan Markle and Prince Harry's...

Elon Musk and his girlfriend Grimes are 'semi-separated,' co-parenting their son

Tom Cruise and Hayley Atwell, who was rumored to be 'pretty inseparable'...

Sidharth Malhotra is currently on cloud nine as a result of the...

The Firm is apparently becoming concerned about Meghan Markle and Prince Harry's...

Bank of England takes the stage after Fed signals tapering

LONDON: The Bank of England is set to keep its stimulus and record-low...