Iqra Aziz has showered praises on Geo Entertainment and 7th Sky Entertainment for suspending Khalil-Ur-Rehman Qamar’s contract after the he used abusive language against Marvi Simed during a live show.

Taking to her Instagram stories, the actress shared a screenshot of a report on Geo’s decision with a caption that read: “Thankyou for standing with your leading ladies and for all the women.” 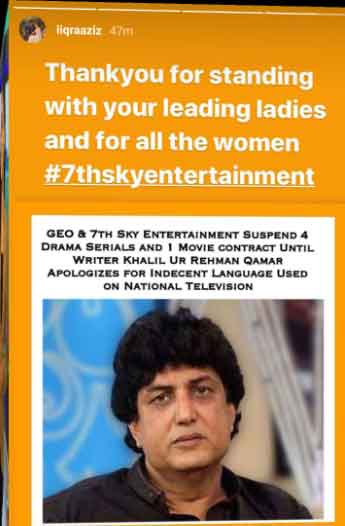 Geo Entertainment on Thursday said in a statement that they are suspending Qamar’s contract until he tenders an apology.

This decision came after the famous playwright signed to write four drama serials and a feature film for the channel.

Earlier, Khalil-ur-Rehman Qamar had a discussion around feminism and Aurat March in a talk show.

As we all know about the director’s short-tempered behaviour, he used abusive spat with a participant during the talk show.

At first, Khalil-ur-Rehman Qamar carried on with his bit of conversation before he Marvi Sirmed interrupted him.

Marvi Sirmed triggered the extremely short-tempered writer with a slogan of the upcoming Aurat March.

He had previously taken issue with the slogan, ‘Mera Jisam meri Marzi.’