Kareena Kapoor has busied herself completely with Instagram antics and filling it pretty quickly.

This time, on her Instagram story, Kareena Kapoor has shared stages of her dessert relishing session.

Since it’s Kareena, all of the stages came with cheeky captions.

“Dessert doesn’t go to the stomach. It goes to the heart,” she wrote for a photo. 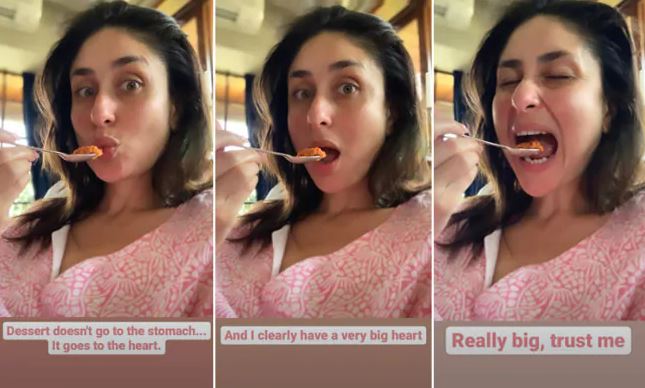 While, she captioned for another one: “And I clearly have a very big heart.”

In the third one, she can be seen taking a big bite of the halwa.

Afterwards, her “Hence, proved” post came with a photo of a half-finished bowl of gajar ka halwa. 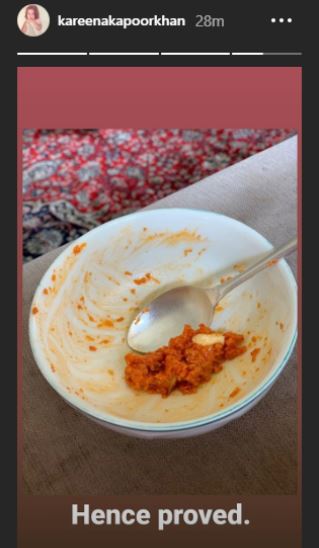 Meanwhile, caption queen Kareena Kapoor offered glimpses of how a usual day at her home looks like.

The actress is the queen of one-liner captions on Instagram.

“Girls just wanna have sun,” she wrote for a photo of her sunbathing in a kaftaan.

On the work front, Kareena recently shot for ‘Angrezi Medium’ but theatres shut down just after its release due to the coronavirus outbreak.

Director Homi Adajania said that the film will re-release once the situation improves.

Earlier, Ahead of Women’s Day 2020, Kareena Kapoor Khan made her big debut on Instagram.

Sharing the ‘The cat’s out of the bag’ post, Kareena announced her Insta debut.

And after the big announcement, the first gem that she shared on her account a picture of her with her cutie, Taimur Ali Khan.

Yes, the little munchkin of the Pataudi family has made his debut on Kareena Kapoor Khan’s Instagram.

Further, in the backdrop is Kareena’s face half hidden by Taimur and half by the blur effect, as she wanted her son to be the hero of the frame.

Therefore, in the caption also she wrote: “The only one I will ever allow to steal my frame.”