She also tagged Rishi Kapoor and Irrfan Khan in her post. 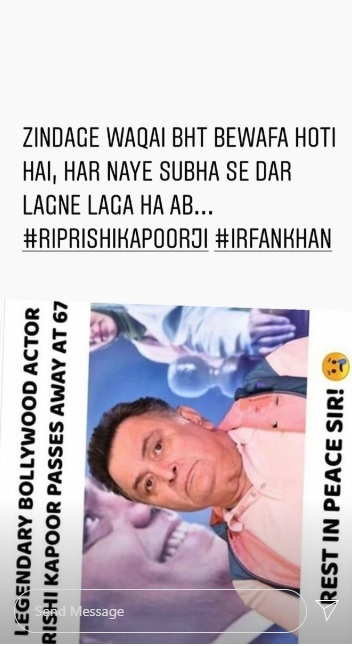 Versatile Bollywood actor Rishi Kapoor passed away today in Mumbai, aged 67. The popular actor had been unwell for a while and was admitted to a hospital in Mumbai.

However, according to reports, Rishi Kapoor was battling cancer relapse. The Bollywood actor returned to India last September as he underwent treatment for cancer in the US for almost a year. In February, Kapoor was hospitalized twice due to his health issues. Legendary Rishi Kapoor, who has been quite active on social media, hasn’t posted anything on his Twitter account since April 2. He was Raj Kapoor‘s third born, after Randhir and later Ritu Nanda, he was older to Reema Jain and Rajeev Kapoor.

Bollywood’s National Award-winning actor Irfan Khan laid to rest at Mumbai’s Versova cemetery. The actor hospitalized on April 28 evening and kept in the ICU because of a colon infection where breathed his last at the age of 53. Irfan Khan survived by his wife Sutapa Sikdar and two sons Babli Khan and Ayan Khan.

The news comes just two days after the actor’s mother Saeda Begum breathed her last on Saturday in Jaipur where she used to stay.