Did you know Halime Sultan once schooled Priyanka Chopra?

Pakistanis are once again showering their abundance of praise to Turkish actress Esra Bilgiç, who played the role of Halime Sultan in the blockbuster Turkish drama Ertugrul Ghazi.

Priyanka Chopra ridiculed a Pakistani-born girl for questioning her controversial statement on ongoing tensions between Pakistan and India, which drew criticism.

During the ceremony in Los Angeles, Ayesha Malik confronted Priyanka Chopra Jonas about allegedly encouraging India-Pakistan nuclear war at a beauty event in Los Angeles and labelled her a ‘hypocrite’.

She said she was “extremely disappointed” at the UN ambassador and global star’s response to her question.

Ayesha Malik had her mic taken away when she was questioning the Priyanka Chopra at the event. Instead of replying the question, UN goodwill ambassador Priyanka Chopra said “why are you ranting girl” and portrayed as Ayesha was screaming at and attacking her.

Priyanka Chopra tweeted during a time when we were this 👌🏽 close to sending nukes to one another. Instead of advocating for peace she tweeted in support of the Indian army pic.twitter.com/LhbMkOW59v

Following this the Turkish actress Esra had made a comment on an Instagram post of Priyanka Chopra in August 2019, which has now gone viral in Pakistan again.

Priyanka Chopra shared a photo of herself, Sophie Turner and Danielle Jonas on Instagram, on which  Ertugrul’s actress commented, “Being patriotic doesn’t mean you should encourage war. You shouldn’t belong in a conversation concerning war as a US Goodwill Ambassador. You affect many children, many as a role model.” 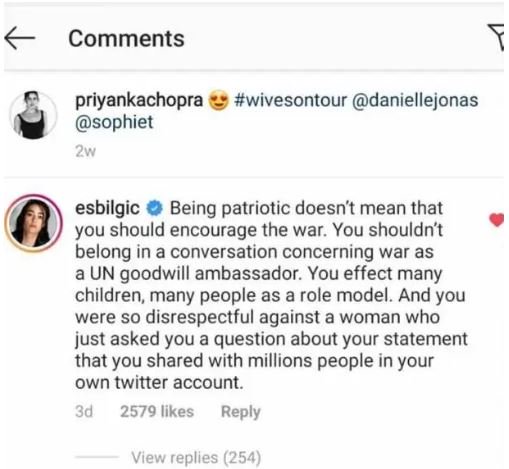 Now, Pakistani users are appreciating the Turkish actress’ comment on Priyanka Chopra’s post and praising her statement by tagging her in various comments.

It should be noted that Ertugrul Ghazi has break all records of popularity in Pakistan and the actors working in it have also receiving praise.

Recently, a photo shared on Esra Bilgiç’s Instagram in March was criticized by Pakistani fans for her dress.

But now people seem to have forgotten and appreciating Halime Sultan for raising her voice in support of a Pakistani-born Ayesha and also schooling Priyanka Chopra Jonas for supporting the war.

It should be noted that the story of the play Dirilis Ertugrul was based on Ottoman Empire in the 13th century and the main story of this play revolves around a brave Muslim general named ‘Ertugrul’ who is also called ‘Ertugrul Ghazi’.

Looking at the life of Esra Bilgiç, the actress was born on October 14, 1992 in Ankara and graduated from a university in Istanbul with a degree in international relations and is currently studying law.

She entered the world of showbiz in 2014 with the Ertugrul series and besides Ertugrul, she has acted in 2 more plays and a film.