Asim Azhar and Hania Aamir’s friendship is getting stronger

After all the controversy, Asim Azhar and Hania Aamir’s friendship seem to grow stronger day by day as the actress joined Azhar in with lyrics to Asim’s new song on Instagram. 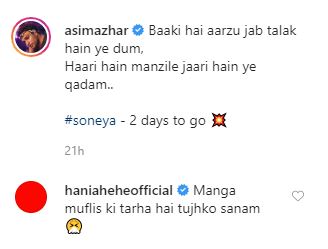 Asim and Hania’s relationship became one of the biggest controversies in Pakistan when the actress “friend-zoned” the Tum Tum singer live on Instagram while talking to Aima Baig.

Many people had trolled Asim as everyone believed that the two of them were dating each other. However, Asim clarified everything in his recent post and told people not to cross their limits. He and Hania will always be great friends.

Hania Aamir reveals she is not in relationship with Asim Azhar

Actress Hania Aamir has recently confessed that she is not dating the...

Asim Azhar had featured the gorgeous Hania Aamir in his recent song Tum Tum and also in his upcoming song “Soneya”.

Lady Gaga stole the show at the inauguration of US President, Joe...

Momina Mustehsan is known as a young and popular singer in the...

Alex Rodriguez discusses his plans of marriage to Jennifer Lopez

Alex Rodriguez shed light on his future plans with Jennifer Lopez during...

Before Donald Trump ended his presidency term, he granted clemency to multiple...

The World Economic Forum (WEF) has agreed to provide technology training to...

Simpsons Once Again Shocked Everyone With Its Prediction

There is nothing hidden that the Simpsons is now considered as predictive...

Chief Justice of Pakistan Gulzar Ahmed has been tested positive for coronavirus. ...