A fan’s dream comes true when his favorite celebrity replies to him back. The same thing happened with a Pakistani fan of Dirilis: Ertugrul.

The Turkish drama series Dirlis: Ertugrul has won millions of Pakistani hearts by portraying Islamic history in the best way possible. People of Pakistan are obsessed with the drama as well as its cast.

Recently, Nurettin Sonmez, who played the role of Bamsi in Dirilis: Ertugrul replied back to one of his Pakistani fans. He wrote,

“I received your message. Thank you.”

Sonmez expressed his feelings to visit Pakistan soon. He penned, 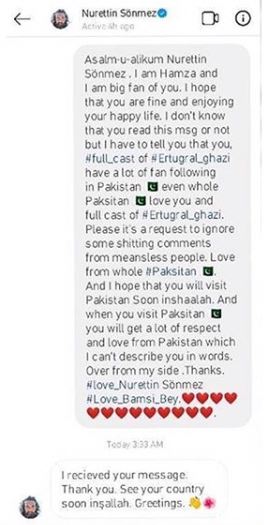 After receiving sheer amount of love from Pakistan, the cast of Dirilis: Ertugrul wished to visit to Pakistan. According to details, the cast of the Turkish drama series may arrive in Pakistan in October or November.

The cast of Turkish drama serial Dirilis: Ertugrul has received loads and...