Pakistani showbiz stars joined countless of those who expressed deep concern over the aftermath of torrential rains in Karachi.

Pakistani showbiz star Sajal Ali has said that she was praying for the safety of everyone in this rainy season after at least 23 people were killed in Karachi in different incidents as record-breaking rains battered the city crippling life on Thursday.

Sharing some emergency helpline numbers for Karachi, the Alif actress said, “Our heart goes out to everyone suffering because of the rains.”

Praying for the safety of the people, Sajal went on to say “May Allah turn it into a blessing.” 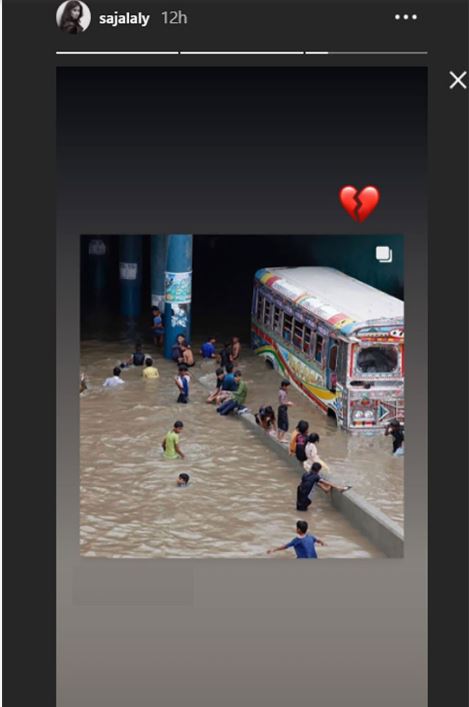 Actor Yasir Hussain in an Instagram story, wrote “Karachi ko sub ney mil kar barbad kia hai. Haseen shehar hai yeh, kachra daan banadia ( Everyone has ruined Karachi together.  It was a beautiful city that has been made into a garbage dump ).”

Social activist Shaniera Akram tweeted a clip of the streets flooded with water. Alongside the clip she wrote, “Electrocution, drowning, irreversible damage to property, poisoning, cross-contamination, hepatitis, dysentery, typhoid, risk of the polio outbreak, not to mention the diseases associated with mosquito infestation like dengue and malaria! How is Karachi not in a state of emergency?”

Television personality Fakhar e Alam talked about how the city, despite being the largest has been ignored repeatedly by the powers that be.

He also tweeted a video showing how rain water entered in house.

Many homes in Karachi have been badly affected. Remember we don’t have home insurance for urban flooding etc the economic impact of these rains will be in billions. So many already struggling households devastated. Prayers for everyone’s health, safety & property. #KarachiRains pic.twitter.com/xWTYeTkhSn

Versatile actor Faisal Qureshi also requested the people to take special care and don’t take the rain as fun. “Karachi is not capable to deal with it,” he added.

Dear All, it is extreme rain today, the Hub Dam has already overflow.Take special care, don't take this rain as fun, Karachi is not capable to deal with it. Stay Indoors, Stay Safe, take care of all people around you ..ALLH pak sab ko apni amaan mey rakhay ameen