Historical Turkish drama series Dirilis: Ertugrul has won the hearts of millions with its strong storyline, however, its cast was one out of several reasons for the series’ popularity.

Engin Altan Duzyatan, who played the main lead as “Ertugrul Ghazi” in Dirilis: Ertugrul was accompanied by his loyal friends and soldiers Turgut Alp played by Cengiz Coşkun, Dogan Alp played by Cavit Çetin Güner, and Bamsi which was played by Nurettin Sönmez, in the Turkish drama series.

On Thursday, Cavit Çetin Güner who played the role of Dogan Alp, uploaded a picture on his Instagram account with a DJ music system and wrote,

To which, Nurettin Sönmez aka Bamsi replied, 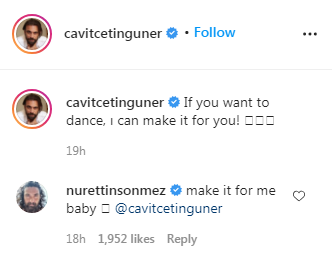 It should be mentioned here that Turkish star Cavit Çetin Güner aka Dogan alp has finally arrived in Pakistan on 16th September 2020. He started his morning in Islamabad.

The beautiful Pakistani actress Syra Yousuf astonished her fans and followers with...