One o the most followed celebrities of Pakistani showbiz, Mahira Khan has fans other than Pakistan too. After her work in Bollywood, the actress has gained much popularity in India as well.

The actress received immense love from the other side of the border because of her remarkable performances.

After Mahira’s role in Raees, Mahira has found a secret fan in Hrithik Roshan too as he follows the starlet on Instagram.

Hrithik Roshan’s profile features Mahira’s, as one the accounts that he is following on the photo-video sharing app.

Out of the 170 people that Hrithik is following, one of them is none other than our darling from Pakistan. 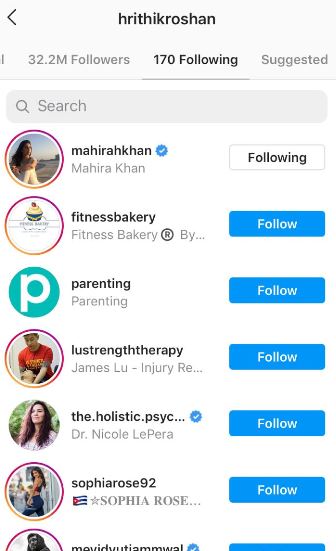 However, Mahira had many fans from the neighbouring country after her blockbuster drama serial Humsafar opposite Fawad Khan, which had gained immense love.

Do you know Mahira Khan can ride a motorcycle?

Mahira Khan is full of surprises, as she recently stunned fans by...

Earlier, the Raees actress had uploaded an edited picture of SRK and Uma Thurman shaking legs together on Instagram.

Mahira cropped her co-actor SRK picture, replaced him with Travolta, joined it with the 90’s iconic film “Pulp Fiction” scene in which John Travolta and Uma are performing on the stage.

She captioned it: “A bit of a gangsta and a little bit of a lovaaa. P.S Not to take away from Travolta, but I mean.. Srk shaking a leg with Uma Therman.”

A bit of a gangsta and a little bit of a lovaaa 🕳 P.S Not to take away from Travolta, but I mean.. Srk shaking a leg with Uma Therman 💣

Duke and Duchess, Prince Harry and Meghan Markle stepped down from being...

The dollar depreciated by 32 paise on the first day of the...