Why Armeena Khan is not interested in meeting Cavit Çetin Güner?

Why Armeena Khan is not interested in meeting Cavit Çetin Güner?

As Dirilis: Ertugrul star Cavit Çetin Güner, who played the role of Dogan Alp arrived in Pakistan today, his fans got extremely excited and could not wait to meet him.

However, Pakistani actress Armeena Khan seems to be “not interested” in meeting the Turkish star. One of her fans suggested her to host a meet and greet with Cavit Çetin Güner, to which the Janaan actress replied,

“Umm, welcome to him and may he have a great time with you his fans. But why would I do that? Mera rishtaydaar tow nahi hai? Begaani shaadi mein Abdulli dewaani? No offense to anyone.” 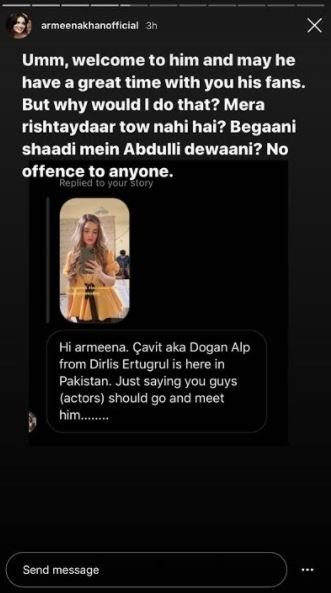 Her reply started to create chaos on the internet and fans of the historical drama series Dirilis: Ertugrul began to bash her, they even compared her with Yasir Hussain.

But Armeena handled the situation wisely and said,

“Really? If you’re going to disrespect me over other actors then you never respected me in the first place. Now go about your business and don’t you dare threaten me again! I’m here for my fans not disrespectful, seasonal people like you. Idiot.” 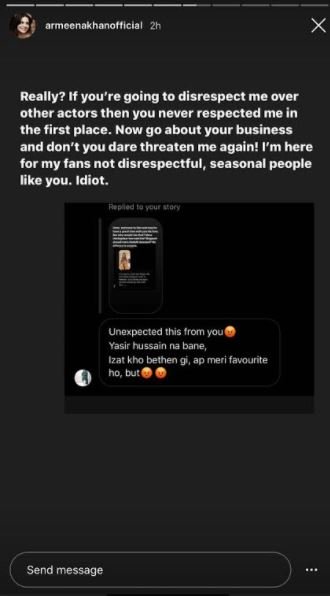