Cengiz Coşkun is stealing hearts with his killer looks

Cengiz Coşkun is stealing hearts with his killer looks

He once again stole the hearts of his fans after posting a picture in which he looked absolutely handsome.

Taking to his Instagram handle, the Turkish starlet was seen wearing an all-black suit. His charming looks has surely taken his fans’ breath away!

Have a look at Cengiz Coşkun picture:

Many of his fans filled the comments section with their love and affection soon after he uploaded the snap. 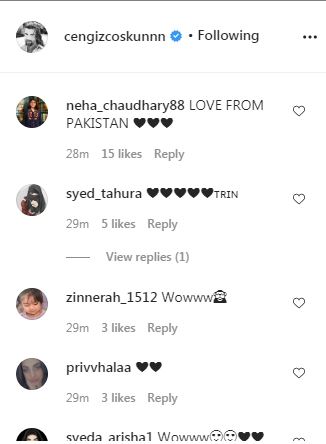 Furthermore, for his charming personality and acting skills, the Turkish actor signed a deal with local brands in Pakistan.

The world-famous Turkish drama based on Islamic conquests, Diriliş: Ertuğrul, has become a hit in Pakistan too.

Prime Minister Imran Khan had recommended Pakistanis to watch the series which will help enlighten them with the golden era of Islam.

The drama series has gripped Pakistani audience with its daring protagonist, cliffhangers and high production values since it began broadcasting in the month of Ramadan. The Urdu-language version of the show has racked up more than 240 million views on YouTube alone.