The Friends actress was among the Hollywood celebrities who supported Joe Biden, the Democratic candidate, against Donald Trump in the US Presidential elections.

After Biden won against Trump in the Presidential elections, the Hollywood actress couldn’t control her excitement that a dog named “Major” will be moving to the White House in January 2021 along with Joe Biden.

The We’re the Millers actress took to her Instagram on Sunday and shared a picture of Biden and his dog while going for a walk.

“We love to see it. Major will be the first shelter pup to move into the White House.”

Major is the German shepherd owned by president-elect Joe Biden. 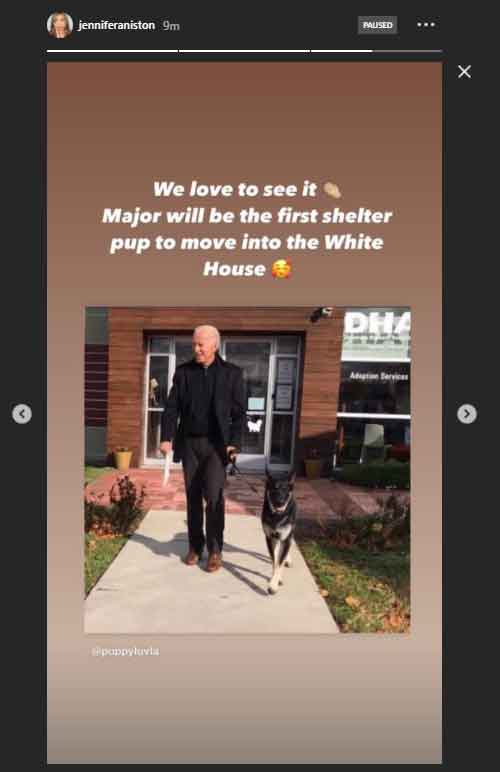 Joe Biden has won the Electoral College votes and has become the...

Taylor Swift uncovers a ‘big secret’ about her song ‘Folklore’

The vocalist Taylor Swift uncovered a big secret about her song, Folklore....

Federal Minister for Information Shibli Faraz has prayed for the recovery of...

Following a September deal between the United Arab Emirates (UAE) and Israel...

COVID-19: List of facilities with vacant ICU & HDU beds for patients in Sindh

Sindh Health Department on Thursday has shared a list of facilities with...

Pakistan summoned the Indian diplomat on Thursday to lodge a strong protest...