In her latest snaps on the photo-sharing platform, Nora celebrated her achievement in style.

She can be seen holding balloons indicating the number of followers while being surrounded by the vastness of the desert.

Earlier, a video of the stunner’s dance from past went viral on social media and people simply gushed over the beauty.

Nora can be seen dancing with a choreographer Rajit Dev on a beach. No matter how good the choreographer was in the video, everyone’s eyes were stuck on Nora.

Nora belongs from Canada and made her debut in Bollywood with the 2014 film Roar: Tigers of the Sundarbans.

In 2015, she participated in Bigg Boss 9. She is best known for her dance numbers such as Dilbar (Satyameva Jayate), Kamariya (Stree), and O Saki Saki (Batla House).

Moreover, Fatehi’s Japanese fans performed an impressive dance on Naach Meri Rani as it became a hit in Japan too.

Four girls nailed the dance moves in the video. These were the same moves with which Nora made her fans swoon in the first place. 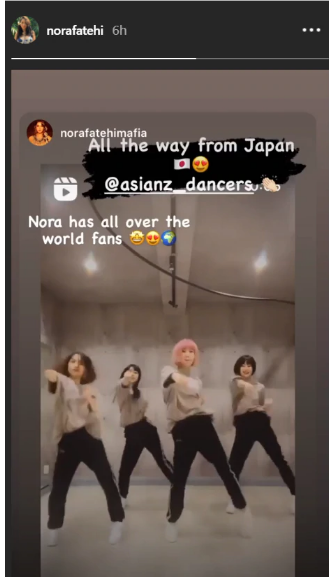 Billie Eilish opens up about her struggles with body image

Billie Eilish opened up about her struggles with body image and body-shaming...

Pakistan has strongly opposed the addition of new permanent seats in the...