Sharing the news on Instagram, the ‘Mohabbat Bhi Zaroori Thi‘ singer thanked his fans for their “love and support.”

“Thank you to all my fans for making 5 Million subscribers possible. I want to celebrate this moment with you all. Thank you, everyone for all the love and support”, he penned few lines to extend thankfulness. 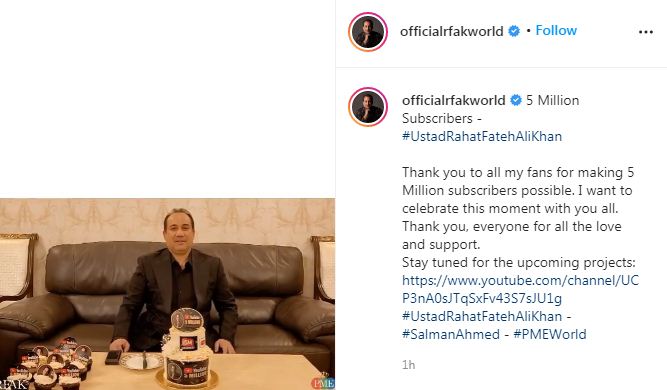 At the age of seven, Khan had since released more than 50 albums, performed in numerous high-profile concerts across the world and amassed a global following, achieving over one billion views online.

Rahat Ali Khan has sung more than 50 title tracks of television serials and over 100 film songs in Pakistan and Bollywood as well.

In June 2019, Khan was conferred an honourary degree by the Oxford University.

The five-minute video has been shot in Karachi and its nearby areas. Actors Sajal Aly, Imran Ashraf, and Amar Khan made a special appearance along with the two legends.

Furthermore, Rahat Fateh is a nephew of legendary Qawwali maestro Ustad Nusrat Fateh Ali Khan. He began his career at the age of three, performing and studying under the tutelage of his uncle referred to as the “King of Qawwali”.

Veteran singer Rahat Fateh Ali Khan has made a big name for...