Pakistani actress Mahira Khan has been named in the BBC 100 most influential women of 2020. The outlet said while releasing the names that,

“In a year of incredible change, it is only fitting that we acknowledge the female leaders who have helped us weather the storm.”

Mahira’s beau Salim Karim has shared an appreciation post for the Superstar actress and said that he is proud of her. 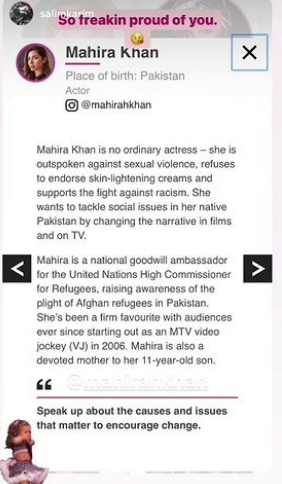 Earlier in June, Mahira Khan revealed about her relationship with rumored beau Salim Karim, during a live-session video with designer HSY.

Mahira confessed to being in love and considered him as a blessing.

The conversation started with HSY saying, “You are in love now, his name is Salim. When you look deep into his eyes, what is the first thing that comes to your mind?”

After listening to HSY’s question, Mahira hesitated a little but then responded,

“There’s a line in Humsafar, which I thought was beautiful, where Ashar says to Khirad, ‘Pata nahi tum mujhe kis naiki kay badlay main miley ho [I don’t know what I did to to deserve you.]  I think the same about him.”